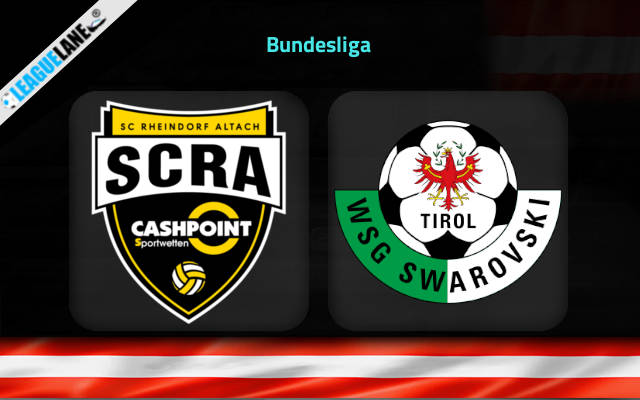 Round 32 of Bundesliga Relegation Group will start this week as the group leading Tirol visit Altach who are in the drop zone. These two sides will battle it out at Cashpoint-Arena, this Friday.

Tirol is at the 7th spot on the standing with 28 points from 31 games. They won and drew 10 games each while having lost on 11 other occasions. The visitors have a 5-point lead over LASK and they currently reside at the only available Conference League Play Off spot. Their struggles at the defensive end of the pitch has also been another key factor as they have conceded 56 goals so far.

WSG Swarovski Tirol go into this clash following a 4-2 league win over Hartberg in their last outing. Illustrating their bias toward high-scoring encounters, we’ve seen goals 22 times in the prior 6 matches in which they have sent out their troops, making it an average of 3.67 goals for each fixture.

On the other hand, Altach resides at the bottom of the group in 12th position on the table with 19 points. Of the 31 matches played, they won only 6 times in the league while drew on 8 and lost on 17 other occasions. Their total goals to conceding ratio stands at 22:48 which happens to be the worst in the group.

Altach will want to continue from where they left off last time out with a 3-0 Bundesliga success against FC Admira. Ludovic Magnin’s men have hit the back of the net a sum total of 8 times over their prior 6 outings while letting in 7 from the same.

It’s important to point out that Altach need to win this match, as anything other than a win will not be enough to keep them in the Bundesliga next season. Moreover, the hosts have not won a home game since August last year.

We therefore envisage a draw or win for Tirol this Friday.