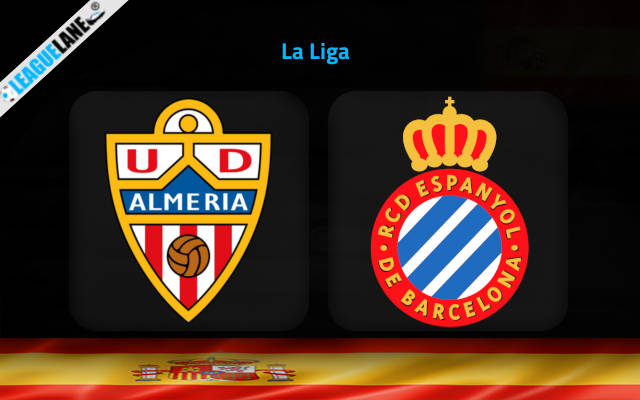 Almeria and Espanyol are separated by only one point in the bottom half of the Spanish La Liga standings going into their 19th round clash at Estadio de los Juegos Mediterraneos.

The hosts are winless in four post-World Cup affairs in the league but they have managed three draws in the process.

The fact that Rubi’s men have managed back-to-back draws against the likes of Atletico Madrid and Valencia in the previous two rounds speaks enough about their current form.

Rubi can be particularly pleased with the fact his men have bagged two goals away at Valencia on Monday evening. This will serve as a massive confidence-booster for a side that has generally found goals hard to come by in this term of La Liga.

Espanyol will also enter this match in high spirits. They are unbeaten in four successive league outings after the World Cup break.

The run includes a 1-1 draw to local rivals Barcelona at Spotify Camp Nou as well as the back-to-back victories over Getafe and Real Betis in the previous two league affairs.

Espanyol have an exciting offensive line led by the likes of Joselu (10 goals in 8 appearances) and Martin Braithwaite (4 goals in 13 appearances). The latter made the difference in the last weekend’s win over Betis at RCDE Stadium.

Espanyol are on a great run with back-to-back wins over Getafe and Betis and we believe they have what it takes to keep it going here against Almeria. The away win is very much tempting at the 3.00 odds.

Those who prefer correct score options can chase the exciting 11.00 odds offered for Espanyol to win 2-1. The Away Win & Both Teams To Score pick is also well on the cards at the 6.00 odds.