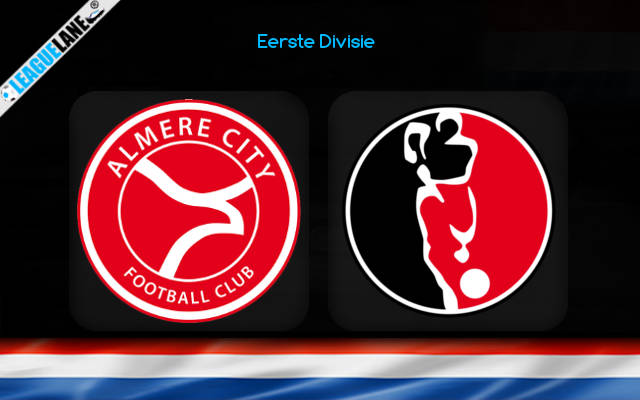 Almere City is second from the bottom after registering their 8th loss in the last month. They have the highest number of draws in the league and have found only 1 win from the last 10 games played in the league. Helmond Sport is the last team on the standing who have recently reduced 3 points due to Federation decision. They lost thrice from the past 5 fixtures and hopes to turn the tables as they travel to Yanmar Stadion this Friday for the upcoming Eerste Divisie fixture.

The hosts are at the 19th spot on the standing with only 23 points from 28 games. They won only 5 times in the league while drawing on 8 and losing on 15 other occasions.

Almere City got defeated in their last game at the hands of Venlo by 0-1. Throughout their 6 previous matches, Alex Pastoor’s squad have bottled up 5 times, yielding them a goals per game average of 0.83.

On the other hand, Kattenmeppers resides at the rock bottom closing the 20th position on the table with a mere 21 points. Of the 28 matches played, they won and drew 6 times each while losing on 16 other occasions. Their total goals to conceding ratio stands at 28:49 which is the second worst in Eerste Divisie, showcasing their dreadful lineup.

Helmond Sport lost the last league game against Eindhoven by 1-2. They have been scored against on all of their past 6 league schedules giving up 14 goals on the process.

Since both sides are equally weak and in dire need of a win, we feel that a draw is likely since both sides have drawn more than 21% of the games played this season. However, a narrow win for the hosts cannot be be ruled out.