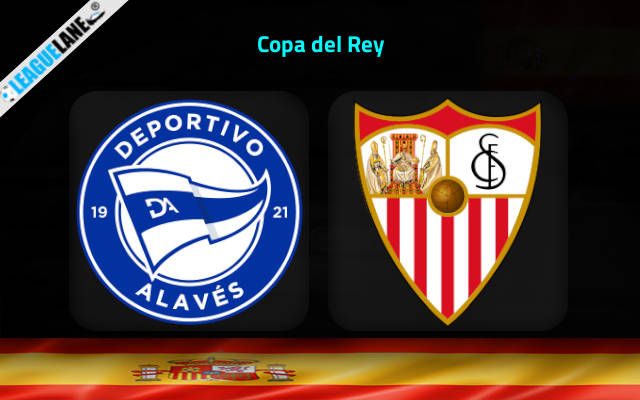 Alaves vs Sevilla Predictions and Free Tips from our expert tipsters when the teams go head-to-head in Spanish Copa del Rey on Tuesday, 17 January 2023.

Sevilla possibly had the worst opening to their season ever this time around. However, they are trying to make amends. And their run in the Copa del Rey is a great confidence-boost for the squad.

Meanwhile, Alaves are from the Segunda, and are trying their absolute best to hold on to a playoff spot. But their poor h2h record against this opponent is a cause for worry.

Sevilla are on an unbeaten run against this foe in the last five years. In fact, they won five of the last nine such clashes, and have a perfect winning record at this stadium in the last four years – barring a single draw.

Who will win the match between Alaves and Sevilla?

Sevilla value a deep run in the Copa del Rey quite much this time around. They need it to instil confidence and belief back in the squad. Quite simply they are wounded beasts, and need to be handled carefully.

Moreover, they have a great h2h record against this rival, and most of all Alaves are from the second division. Sevilla by all means have the edge this Tuesday.

Six of the past seven fixtures of Sevilla had three or more goals, and they also consistently found the back of the net against this opponent in h2h encounters.

Furthermore, the guests of the day have shown definite signs of improvement after the World Cup break, and will be eager to not take any chances. The possibility of goals coming in plenty is quite high.

Sevilla have a combined scorecard of 10-0 from their last three match-ups in the Copa del Rey, and they also kept clean sheets in two of the past three h2h clashes against this foe. With them being very particular about their Copa future, the chances of Alaves finding the back of the net is low.

Sevilla are in great form after the World Cup break, and importantly they have been on a phenomenal streak in the Copa del Rey. As a matter of fact, they have a combined scorecard of 10-0 from their last three fixtures in the competition.

Moreover, Alaves have a poor h2h record against this opponent, and also are from the Segunda. Likely, a Sevilla to Win bet at an odd of 2.00 is a great pick.

Going on, an Over 1.5 Team Goals by Sevilla at an odd of 2.10 is another good choice to be made this Tuesday. Their frontline have always performed well in h2h meetings, and they have done so in the current edition of the Copa del Rey too.