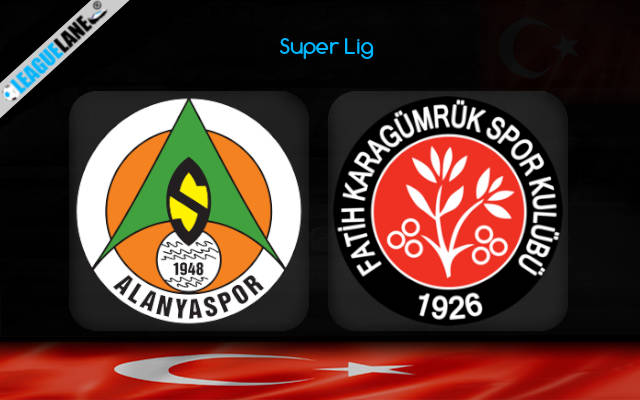 Alanyaspor vs Fatih Karagumruk Predictions and Free Tips from our expert tipsters when the teams go head-to-head in the Turkish Super Lig on Sunday, 22 January 2023.

Both Alanyaspor and Karagumruk are sitting at the alternative positions in the league standings. Alanyaspor is at 9th position while Karagumruk sits at the 10th spot.

Going on, both the teams were unbeaten in four of the past five league outings. By the looks of things, we expect a highly competitive affair on Sunday.

Alanyaspor can also rely on the recent tradition since they won the previous two encounters against Karagumruk. The reverse fixture had finished in a 2-4 win for Alanyaspor.

They have only met twice at this stadium and Alanyaspor were unbeaten in both.

Who will win the match between Alanyaspor vs Fatih Karagumruk?

The home form of Alanyaspor is so impressive of late. They were unbeaten in the past seven home fixtures in a row and five of them were victories.

Knowing that Karagumruk were winless in six of the past eight road trips, we have enough reasons to expect a win for Alanyaspor on Sunday.

The past six away matches of Karagumruk were high-scoring affairs. On the other side, Alanyaspor have been also recording a set of high-scoring matches at home lately. In that case, expect this match to have over 2.5 goals ft.

Neither Alanyaspor nor Fatih Karagumruk owns a strong defensive side in this season. They both have leaked goals at a rate of over 1.5 goals per game. Therefore, both teams to score option is likely to land in this fixture.

The impressive home form and an upper hand in the recent history of this match-up is the main advantages for Alanyaspor here. Karagumruk’s unimpressive away form also adds more to Alanyaspor’s advantage.

We therefore like to place Alanyaspor to win at 1.85 odds as the main betting tip. For the second tip, we like to place both teams to score & over 2.5 goals at 1.80 odds.