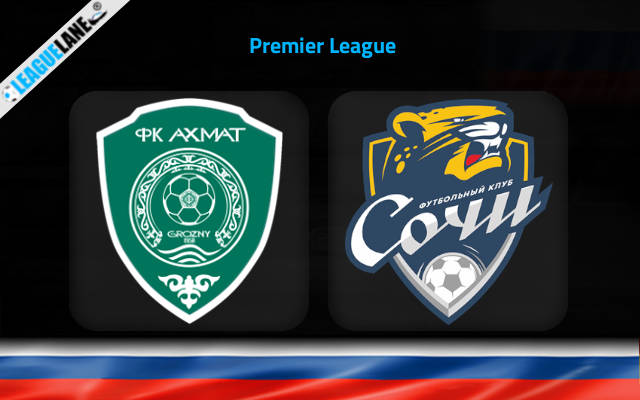 Akhmat Grozny versus PFC Sochi prediction for Monday’s Russian Premier League game, the hosts looking for their first ever win against leaky visitors.

The 2-1 away win against Sovetov gives Akhmat a perfect platform at the start of the campaign. And they will be looking for make home advantage count against the visitors who started the new season in turbulent fashion.

Akhmat Grozny lost just 2 of their last 17 home matches in the Russian Premier League, but Sochi is one of the teams that bagged a win here last season.

We have seen two different sides of Sochi already this season, first they eased past Azerbaijan outfit Keshla with a 7-2 aggregate score in the Conference League. While they lost the opening match of new domestic campaign to newly promoted Nizhny Novgorod.

Their pre-season has been hot and cold as well won 2 and lost 3 and shipped goals in all 5 games.

Sochi have won just 2 of their last 12 away games in the Premier League, making this clash an interesting one to watch on Monday.

PFC Sochi are unbeaten in all four Russian Premier League head-to-head matches against Akhmat Grozny with 3 wins and a draw.

All four matches registered under 2.5 goals with Grozny scoring just 1 goal in the process.

Surprise results are common at the start of the season in the Russian Premier League and Akhmat Grozny can back themselves to steal points away from a team that finished 5th in the division last season.

Though, both teams haven’t been stable in defense, we expect goals at a premium here, certainly we do not see them happening in the previous duels between these sides.