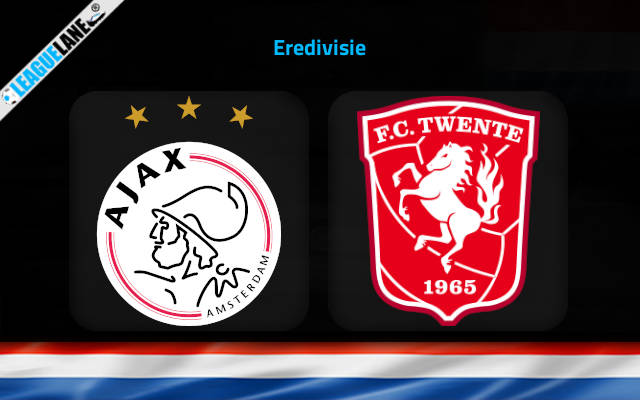 Ajax vs Twente Predictions and Free Tips from our expert tipsters when the teams go head-to-head in Eredivisie on Saturday, 14 January 2023.

Titans Ajax have not been in their best form lately. They are desperately trying to get back into their groove. They are trailing three points below toppers Feyenoord, and cannot let that gap grow.

Meanwhile, Twente are putting in effort to find some consistency. They are dropping a lot of points due to draws, and on the road, it has been quite a poor stretch of results for them since August.

The latest encounter ended in a 5-0 win for Ajax, and they also managed to win four of the former six encounters. They also won seven of the previous eight clashes at this ground, and scored thrice or more in five of the last seven h2h match-ups at this ground.

Who will win the match between Ajax and Twente?

Ajax are not in full swing at the moment. But still they have a superb h2h record against this opponent, and at the same time Twente have been almost a total failure on the road this season.

In fact, Twente were winless in six of their past seven road trips, and in the process they lost four of these fixtures.

As things stand, Ajax are expected to fight it out for the three points this weekend.

Games between these two teams have always been goal-fests, with Ajax being responsible for most. Note that 11 of the previous 13 h2h clashes had three or more goals.

Moreover, four of the last five games of Ajax had goals from both teams, and nine of their preceding ten fixtures had three or more goals.

In addition, nine of the last eleven road trips of Twente had goals from both teams.

It seems that chances are high for goals to come in plenty this weekend.

Ajax might be the favorites this Saturday, but note that they have not kept a clean sheet in their last 14 games in a row. And they even let in two or more goals in four of their previous five appearances at home.

The possibility of both teams finding the back of the net is very high.

Meanwhile, Twente have been a disaster on the road this season. They are conceding goals in huge numbers, and now have put themselves under immense pressure.

And coming to goals, both teams are struggling with their defense, and are conceding in plenty. Seldom have the two teams kept clean sheets over the course of this season. Moreover, former h2h meetings also show this same trend over the years.

By the looks of things, the Over 3.5 Match Goals at an odd of 2.00 is expected to be a good second pick.