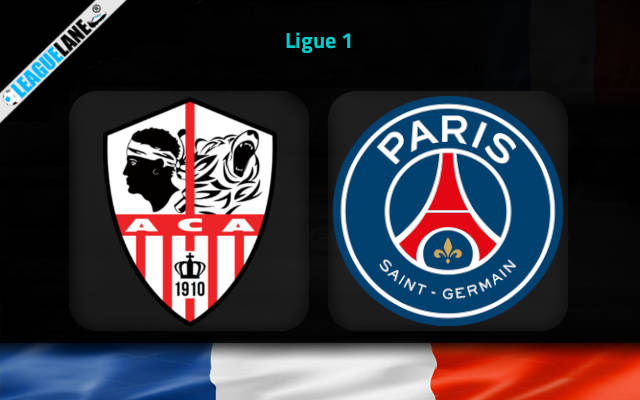 Toppers and defending champions PSG are in fine form, and they are high in confidence after beating arch-rivals Marseille the last match-day. They will not try to consolidate their position at the top with a win this weekend, against the struggling Ajaccio.

Ajaccio are placed 18th in a table of 20 – right in the depths of the relegation zone. They won just twice so far in the competition, and scored the least number of goals. In fact, they are the only team yet to score ten goals in the French top flight this time around.

However, they are letting in goals in huge numbers – and even so in front of their home crowd.

Actually, they have managed to post a single point from all of their home games till now. Barring an only draw, they have a 100% losing record at this venue.

Moreover, of their total two wins in the campaign, one had come against the dead-last placed Brest.

Meanwhile, the Parisians are determined to complete the task of winning the league as soon as they can – as they need to concentrate at the task at hand. Their holy grail is the Champions League, and they cannot spend too many hours going after the league.

As such, they are desperate to secure a win this weekend. Moreover, they also need to build some momentum in order to make it big in the remainder of the group stage of the Champions League.

On top of that, they also have a dominant h2h record against this rival over the past years.

Surely expect PSG to come out on top this Friday.

Not only are Ajaccio recent additions to the French top flight, but they are now expected to take on titans and toppers PSG.

The Parisians are in superb form – so much so that they have a 100% winning record in the league barring two draws.

Furthermore, they totally dominated this foe in previous h2h meetings too.

Count on PSG to have the upper hand this Friday.

Tips for AC Ajaccio vs PSG