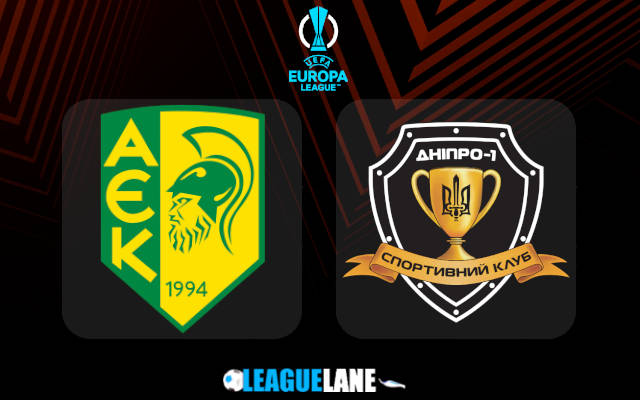 AEK Larnaca will defend a one-goal advantage from the first leg of the Europa League playoffs tie against SC Dnipro-1 on Thursday afternoon at AEK Arena – George Karapatakis.

The Cypriot runners-up thus in a great position to qualify for the group stage of the competition on their return to Europa League after four years.

AEK Larnaca played in the group stage of Europa League in the 2018/19 season when they came third in the group with Bayer Leverkusen, Ludogorets, and Zurich.

They eliminated the likes of Partizan Belgrade in the third qualifying round this year by scoring two goals in each of the two legs.

The team led by Spanish manager Jose Luis Oltra were earlier eliminated from the UEFA Champions League qualifications on penalties by Danish side Midtjylland.

Interestingly, each of five European qualifiers AEK Larnaca played this summer provided goals at both ends.

Their first leg of this tie with Dnipro was a very open match packed with goal-scoring chances at both ends.

We expect the Cypriot side to have plenty of room up front once again here, having registered as many as 17 shots in the first leg in Slovakia (neutral venue).

Dnipro, who played the Europa League final in the 2014/15 season, are massively handicapped because the mentioned first leg of this tie was their maiden competitive match in the last six months.

SC Dnipro-1 did not play competitive football at all in the last six months. They gave away too many chances in the first leg against AEK Larnaca and we expect them to struggle defensively in the return tie on Cypriot soil.

The home win is well worth backing at the 1.90 odds, while we also like the 2.10 odds offered for AEK Larnaca to score two or more goals on Thursday.