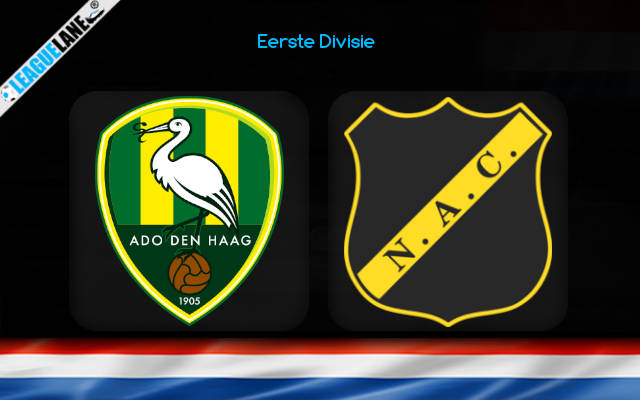 ADO Den Haag vs NAC Breda Predictions and Free Tips from our expert tipsters when the teams go head-to-head in Dutch Eerste Divisie on Friday, 3 February 2023.

Den Haag are one of the three teams in the whole league to have remained unbeaten in the last five match-days. They are also totally unbeaten at home in the past three months.

Meanwhile, Breda are on a great run since the new year. They are scoring in plenty, and most importantly they are making amends for all the points they dropped earlier in the campaign.

Den Haag have a phenomenal h2h record against this opponent. In fact, they are on a four-fixture winning streak, and scored two or more goals in every single one of these games.

On top of that they lost just once at this ground in the past 14 years.

Who will win the match between ADO Den Haag and NAC Breda?

The h2h superiority that Den Haag have over their counterparts for the day is just scary. Such has been their dominance that they lost just a single game at this venue against them in the past 14 years.

They are on a four-game winning streak against this opponent, while Breda managed to win just five times on the road since April of 2022.

Likely, expect a win for hosts Den Haag this weekend.

Den Haag scored twice or more in the past four h2h meetings, while Breda slotted in 13 goals from their past five overall fixtures. Moreover, the last five h2h clashes in a row had three or more goals.

As things stand, anticipate a high-scoring affair this Friday.

Den Haag have just three clean sheets to their name since April of 2022, and they failed to keep a clean sheet in the past eight h2h clashes in a row. On top of that Breda managed to find the back of the net at least once in their last eight road trips on the trot.

By the looks of things, goals are expected from either side of the pitch this weekend.

Den Haag are on a four-game winning streak against this rival, and they have a 100% winning record at home in h2h clashes in the past 14 years – barring just three games.

Moreover, Breda won just once on the road in the last two months, and they managed to register just five wins away from home in the past ten months.

It appears that Den Haag do have the upper hand here. A win for them is placed at an attractive 2.00 odd.

Going on though, their recent defensive performances have been lacklustre.

They managed to keep just three clean sheets from their past 16 appearances at home, while Breda found the back of the net at least once in their past eight road trips. They also scored 13 goals from their previous five overall match-ups.

As such, goals are expected to come from both sides of the pitch. And the odds for the same are placed at 1.67.