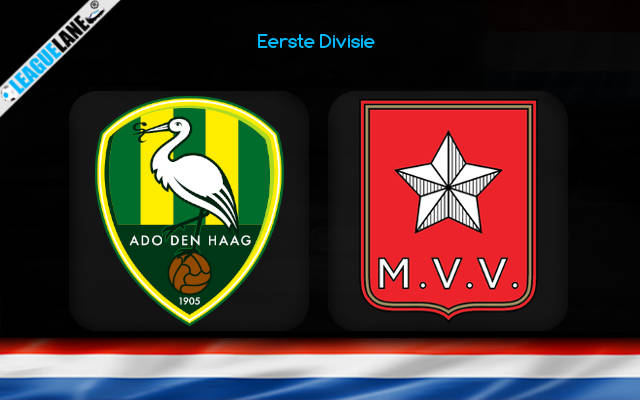 ADO Den Haag vs MVV Maastricht Predictions and Free Tips from our expert tipsters when the teams go head-to-head in Eerste Divisie on Friday, 13 January 2023.

Den Haag performed well against Dordrecht last time and picked up a crucial victory. They are fifteenth in the table and have a busy week ahead of them as they will play in the KNVB Cup.

On the other hand, MVV will risk losing their third place if they don’t bring back their winning momentum. They are currently on a two-game winless run. They had to settle for a point last time as they were held by De Graafschap in a 2-2 draw.

MVV have won five of the last six meetings against Den Haag in all competitions. The last time the host won this fixture at Cars Jeans Stadion was nearly twenty years ago.

Both teams last met back in August and the visitors won that game by 3-1.

Who will win the match between ADO Den Haag and MVV Maastricht?

It is important to mention that the last time Den Haag won a home fixture was way back in October.

MVV have scpred at least two goals in their last five wins against this team. Most recently they scored two goals against De Graafschap.

Since 2013, both teams have found the back of the net in this fixture. Therefore, it is likely that both teams will score this time as well. Also, the last meeting at Cars Jeans Stadion ended in a 3-1 score line.

The visitors are on a two-game winning streak at Cars Jeans Stadion. Also, they are third in the league this season. We can back the visitors to win this fixture. Therefore, the first tip is that MVV Maastricht will win this game – at 4.20 odd.

Our second tip is that Both teams to score – the odd for this tip will be at 1.61. Both teams have scored nine goals combined in the last two head-to-head meetings.