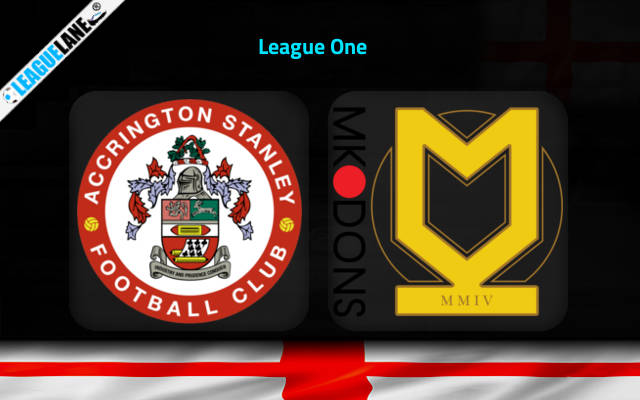 Accrington will come into this in the highest of spirits after winning three of their recent five league matches. They defeated the top flight team Rotherham at home for 1-0 FT score.

They looks impressive lately and have positioned themselves on 10th in the table after bagging 10 points from the last five games.

They hosts MK Dons who occupies the 7th position in the table. They have a seesaw of form. Their current inconsistency will count in this clash against Accrington at Crown Ground on Saturday.

This match is really important for the visitors as they are on the edge of the promotion zone with 4 points shy to Plymouth who occupies bottom of the zone.

They have to register a win but their current fluctuating form is not enough for that. They are going to face Accrington who have picked up their momentum lately and are currently having a good form.

The Reds have won seven of their total 12 home matches. They are into this after beating the like of Rotherham in the previous round at home.

The Dons are dreadful at home but they are having an impressive run on road bagging four wins from their last five away games in league fixtures.

Analyzing the above stats, they both are looking equally strong in this match-up. Therefore, Accrington and MK Dons may well end up canceling each other out here.

There should be little in it, and a draw looks to be quite a realistic result. We’re hence expecting a draw at the end of the match.