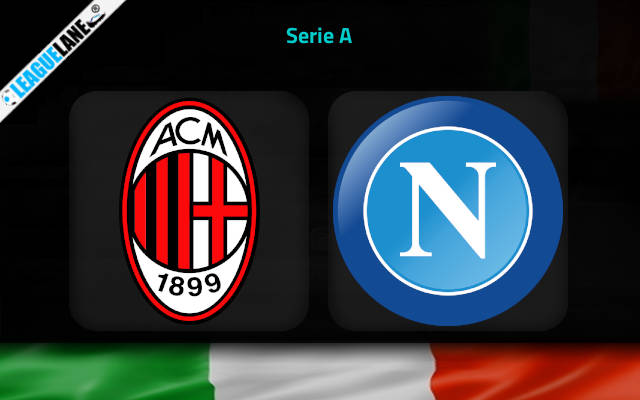 Reigning champions AC Milan lock horns with current toppers Napoli this Sunday at the Stadio Giuseppe Meazza – and sparks are sure to be produced on both ends of the pitch.

AC Milan secured the title the last time around with 86 points against their name, and they lost just four times all through the campaign.

They scored goals in huge numbers all through this stretch, and particularly so at home, they dominated opponents without mercy.

Going on, they are determined to give their absolute best to retain the title, and so far they remained unbeaten in the competition.

They scored the second-most number of goals of all the teams in the tournament, and disregarding just two draws, they have a 100% winning record as well. In fact, one of these two draws came against the in-form Atalanta.

Meanwhile, Napoli secured a third-place finish the last season in the Italian top flight, and they even managed to score five more goals than the champions.

And this time around, they raced to the top of the table, and scored the most number of goals in the competition. Moreover, they too have a 100% winning record, barring just two draws.

Going on, goals also came in plenty whenever these two teams locked horns in the past – and judging all these observations, expect a high-scoring affair this Sunday between these two titans.

AC Milan were unbeaten in 30 of their previous 32 overall fixtures, and in the process they went on a six-game winning streak, a four-fixture winning stretch, as well as two separate three-match winning streaks.

Moreover, they are also on a seven-fixture winning streak in front of their home crowd.

On the other hand, Napoli are on an 18-game unbeaten run, and in the process they went on separate five-game, four-fixture, and three-match winning streaks.

Furthermore, they also scored two or more goals in five of their last six road trips.

Taking into account these observations, expect a high-scoring affair this weekend between the two teams.

Tips for AC Milan vs Napoli