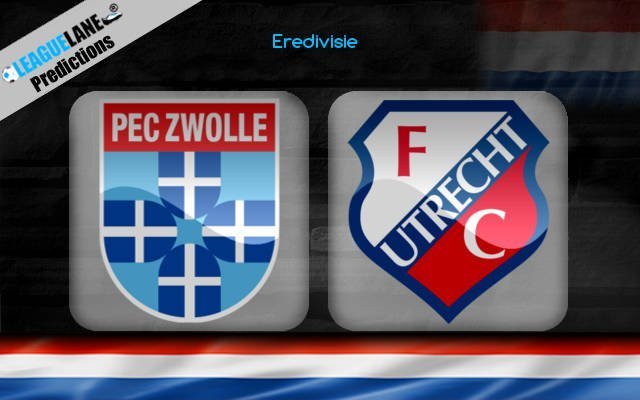 Utrecht fans are traveling to Zwolle hoping to see their team open 2020 with 10th victory of the season as they face off against relegation-threatened PEC.

The Bluefingers crawled their way our of relegation zone with a win at Venlo but ultimately ended 2019 on a sour note following a crushing 4-1 defeat v PSV Eindhoven.

Sitting on the outskirts of relegation zone, John Stegeman’s men are placed 15th at the Eredivisie table with five wins and a draw to their name after eighteen rounds, just a point away from VVV at relegation play offs place.

At their home ground, Zwolle are a bit sturdier, more stable results-wise, winning three in eights games played there, suffering four crumbling defeats at the hands of current top 4 of Dutch football.

Utrecht had the better of the opening stages but eventually succumbed and put down their weapons as Feyenoord powered through and left Stadion Galgenwaard with all the points in the bag.

John van den Brom got his men up to 7th, with 29 points from nine wins following eighteen rounds and at the moments they hold the last ticket for qualification play offs, with Heerenveen lurking in behind, waiting for a slip up.

The Red & Whites are among the better teams in the Netherlands playing away from home, having managed fourteen points from nine games while suffering three defeats. After their most recent one, at Amsterdam, Utrecht has won on last two travels, getting better of Groningen and Heracles.

Thomas Lam, Iiass Bel Hassani and Bram van Polen are out of commission for Stegeman’s side while the guests will have to do without Justin Hoogma, who saw the red in Feyenoord defeat.

The Bluefingers at home, that usually means goals. Lots of them, whether they end up on giving or the receiving end. At Mac3Park Stadion, goals are leaking left and right. On average, 4.7 goals per game, which is just ridiculous. And this being first game of the year, with legs still fresh, both teams will be raring to go and hopefully will give us another spectacular scoreline.

And all things considered, Utrecht should be winning this. They’re much better side and usually do rather well against teams from lower end of the table. They’ve won at Rotterdam v Sparta, won at Groningen (two extremely tough away trips) and most recently also beating high-flying Heracles so I see no reason why their run shouldn’t continue a bit longer.

To all Dutch Eerste Divisie Predictions

© All contents including and not limited to article texts and images are copyrighted to LeagueLane. Do not copy or translate in any form without a written consent. All Rights Reserved. 2016-2020 LeagueLane®
We use cookies to ensure that we give you the best experience on our website. If you continue to use this site we will assume that you are happy with it.Ok