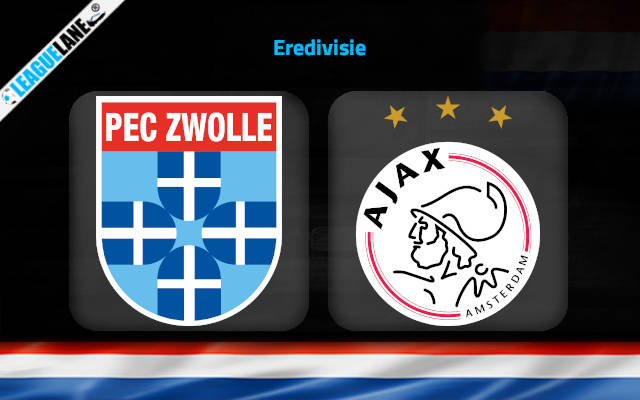 Ajax are the reigning champions of the competition, and they once again started their campaign on an overwhelmingly positive note. Meanwhile, Zwolle are one of the worst, and are placed dead last in the table. Likely, expect a routine win for the title-holders.

They had won the league with an impressive 16-point lead over the second-placed PSV, and in the process, they had scored a total of 102 goals (from 34 fixtures). In return, they had let in just 23 goals, and they had lost just twice all through the campaign.

In the meantime, Zwolle were placed 13th in a table of 18 the past season, and this time around, they are placed bottom-most with a 100% losing record. On top of that, they also have a poor h2h record over the years.

Surely expect Ajax to deliver another huge win this Saturday.

Zwolle are on a five-game losing run, and they are the only team in the whole Dutch top flight yet to score a goal this new season.

On the other hand, their counterparts have a 100% winning record disregarding a single draw, and they have scored the most number of goals, as well as have conceded the least.

In addition, they also have a phenomenal h2h record against this rival over the years.

As things stand, expect a dominant win from Ajax this Saturday at the MAC³PARK Stadion. Expect them to score in plenty.