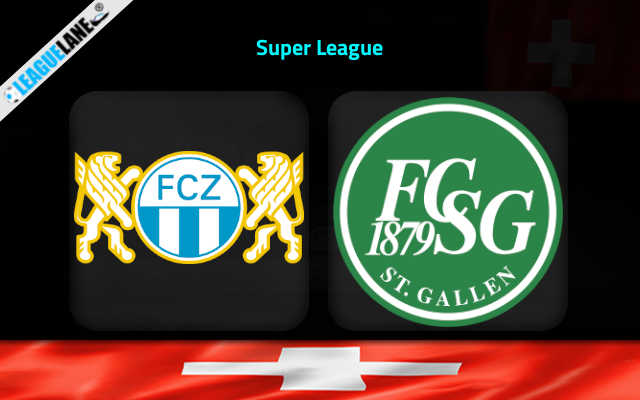 Zurich continue to cruise towards their fourth Super League title seven days ago when they saw off Lausanne 0-2 on the road.

The team led by German manager Andre Breitenreiter are enjoying a spectacular campaign in this term of Super League.

They are as many as 15 points clear at the top of the standings and are on the best way to end four-time-defending-champions Young Boys’ dominance in the elite tier of Swiss football.

The victory at the rock-bottomed Lausanne was the third straight league three-pointer for Zurich who are enjoying a spectacular form this year.

They have won six and drawn one of seven league affairs after the winter break. They will have a nice chance to maintain this spell of form on Saturday afternoon when mid-table St. Gallen come to visit Stadion Letzigrund in the first fixture of Gameweek No 26.

St. Gallen could offer a strong challenge for the sovereign leaders here since they are also unbeaten in the last seven Super League ties.

However, Peter Zeidler’s men have played only a disappointing 1-1 draw at home to the likes of Sion six days ago in the previous round.

They had previously scored at least two goals in six subsequent outings which is why we have reasons to expect a goal fest when they come face to face with the best attacking line in the competition.

Both teams scored in all of the last seven head to head encounters between the two sides.

Zurich have bagged at least two goals in four of the previous five meetings with St. Gallen.

Zurich have a strong home record against St. Gallen with 23 wins, 15 draws, and only 10 defeats in the previous 48 H2H clashes at Letzigrund Stadion.

Zurich look unstoppable at the moment but St. Gallen are also scoring goals for fun these days. Since each of the last seven H2H outings between these two outfits provided goals at both ends, the Over 2.5 goals FT & Both Teams To Score looks as a great betting option at the odds of 1.72.

We will also back Zurich to win at the 1.83 odds since they have won six and drawn one of the last seven league games and since they have also defeated St. Gallen 3-1 in the previous H2H clash.