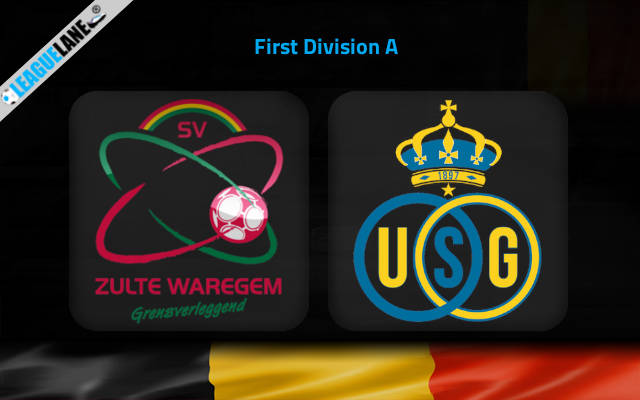 Union Saint-Gilloise travels to Waregem for their 19th match in First Division A, this Wednesday.

Zulte Waregem is at the bottom of the league table in relegation zone. They are in the 17th position with only 17 points to their name. Their last match was against Club Brugge, which ended in a loss for the team with 3-0 Ft score.

Union Saint-Gilloise is the 1st in the league with 40 points after their last match against Mechelen. The match ended in a win for the team with 2-0 Ft score.

Waregem is having a hard time in their matches. They have 4 wins, 5 draws and 9 losses from 18 matches and have scored 27 goals and conceded 41 goals. The team has not won in their last 3 consecutive matches.

Their performance in home matches has also not been the best. They have only won 2 games from their 9 home matches in the league so far. The last match, however, ended with a win for the team.
The match was against Beerschot and the game ended with 2-0 FT score.

Union SG is on the top of the league with 13 wins, 1 draw and 4 losses. They have scored 45 goals and have only conceded 18 goals so far. They have won 8 of their last 10 matches and scored 2 or more goals against their opposition in these 8 matches.

The visitors have performed well in their away matches and have not lost in their last 6 matches. They have also won their last 5 consecutive matches with 2 or more goals.

Union Saint-Gilloise is the clear favourites in the upcoming matches and is likely to score 2 or more goals.