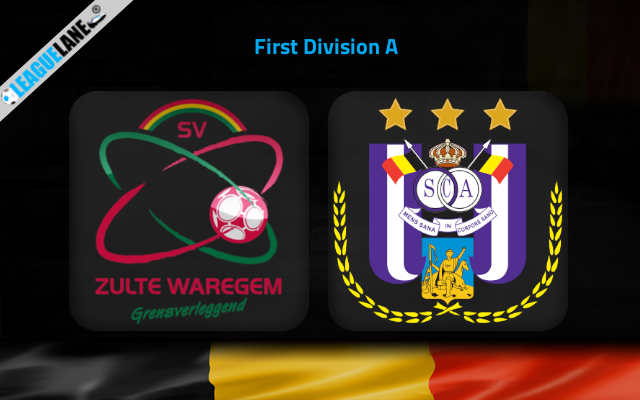 More than 60% of the matches have ended in a loss for Zulte Waregem this season. They managed to beat Kortrijk last time and will now face Anderlecht at Elindus Arena.

Zulte played a great game last time as they defeated Kortrijk by 3-1. Two late goals after the one-hour mark helped the team clinch their second win of the season. This is the only good news for the host as they remain at the bottom of the table.

The last five matches have been very usual for the visitors as they have lost every alternate game they have played. No other team is going through such a turbulent form. Most recently, they lost to Club Brugge by 1-0.

They began this month by losing to Charleroi by a narrow 1-0 scoreline. This result took them to the ninth spot on the table ranking.

One positive aspect about this team is that they have a very good defensive record this season, as they have conceded only thirteen goals till now this is just two more than what league leaders Genk have achieved.

Despite losing half of their games, the team is still in the top ten of the table. The credit for this achievement goes to the defensive backline.

You can expect the following, as our first tip is that Anderlecht will score Over 2.5 goals – the odd for this tip will be at 2.75. In three of the last four head-to-head encounters, the visitors have won this game by scoring a minimum of three goals.

Our next tip for this game is that Second half will have the most goals- the odd for this tip will be at 2.00. The host won against Kortrijk last time by scoring all three goals after the 60th minute. The visitors have scored only three goals this month and all three were scored in the second half of the game.