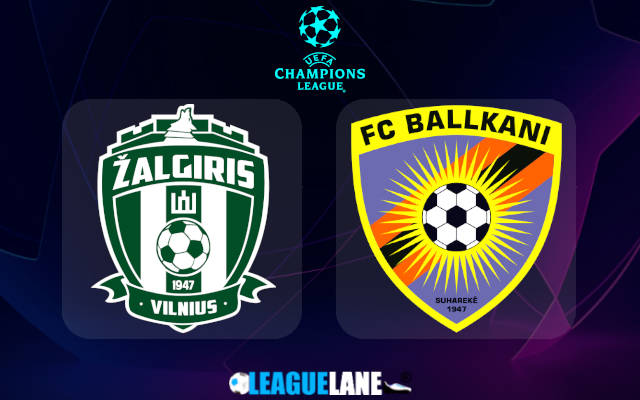 Zalgiris Vilnius play host to Ballkani in a match of their second-leg of Champions League Qualification. A tie breaking game could be seen this Tuesday as both sides battle it out at LFF stadionas.

The Lithuanian side held Ballkani to a 1-1 draw in the first leg played in Kosovo on Tuesday. That result improves Zalgiris’ chances of an eventual aggregate victory. Even a goal-less draw in this upcoming fixture will hand the Zalgiris Vilnius a ticket to the next round.

The hosts haven’t exactly been impressive on attacking as of late. Their sum of goals stands at just 4 against the opposition teams over their previous 6 matches. But they come here on the back of a 5-game unbeaten streak across various competitions.

Zalgiris Vilnius’ best European runs came in 2014 and last season, reaching the play-off round and losing to RB Salzburg and Bodø/Glimt respectively.

On the other side, Ballkani meantime are competing in Europe for the first time ever. They even won their first Superleague of Kosovo title last season. The tie against this Lithuanian side happens to be their first continental outing.

Which ever side advances through this tie will take on Malmo or Knattspyrnufelagio Víkingur in the UCL second qualifying round. It’s not over for the losers who will drop into the Europa Conference League second qualifying fixture.

The Lithuanian side have played in the UEFA Champions League first and second qualifying rounds many times. A step further in the competition is certainly what they are aiming for. They won their last 2 home games by 2-1 margin and they will be certainly looking forward to extend that streak.

Meanwhile, FC Ballkani are debuting in Europe. So they will be giving all out here to mark their impression in the continental competition. Even their performance in the reverse fixture was fantastic. But they currently lost their last away game while coming here.

We therefore expect the experienced Zalgiris Vilnius to win this game at their home.