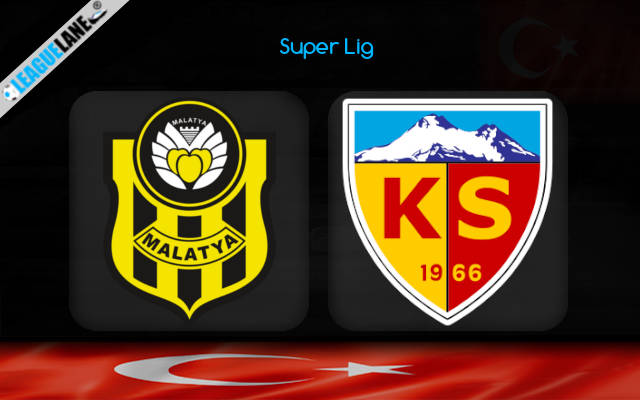 In game week 18 of Super Lig, Yeni Malatyaspor hosts their next match against Kayserispor this Thursday at Malatya.

Yeni Malatyaspor is in the 19th position in the league table, with 14 points from their matches. Yeni Malatyaspor faced Rizespor in their last match, which ended in a loss after Malatyaspor failed to score in the match. The match ended with 1-0 FT score.

Kayserispor is the 15th position on the league table with 20 points from 17 matches. The team faced against Gaziantep in their last match, which ended in a draw. Both teams failed to score in the match, ending the match 0-0 FT score.

Yeni Malatyaspor is in the relegation zone on the league table after their 17 matches. They have 4 wins, 2 draws and 11 losses so far in the league. The team is currently on a 7-game cold streak with loss in the last two games. The team has only two wins from the last ten matches and has also failed to score in six of the matches.

The team has played nine games in their home ground and has two wins in these matches. However, they have scored at least a goal in six of the home matches. Their last home match was against Alanyaspor in which Malatyaspor lost the match after the opposition scored six goals. The match ended with 2-6 FT score.

Kayserispor has achieved 5 wins, 5 draws and 7 losses so far in their league matches. Kayserispor has not won their last two games. The team has scored in seven of the last ten matches and four of the matches have ended with three or more goals.

After a win in their second home match, the team has not won any of their away matches. The team is in a 7-game cold streak at the moment as well. Their last away match was against Besiktas, which ended in a loss for the team after the opposition scored four goals and Kayserispor could score only two. The match ended with 4-2 FT score.