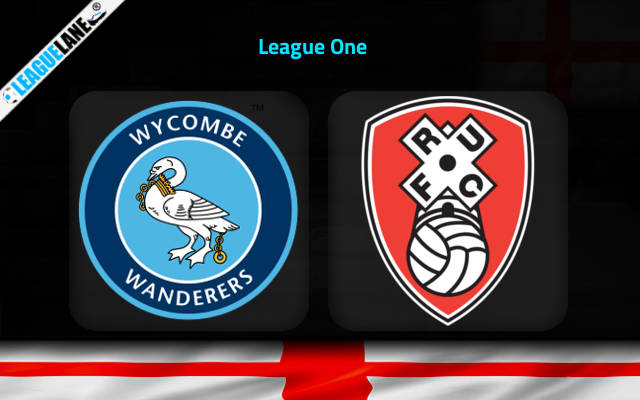 Game week 38 of League One brings us the match between Wycombe Wanderers and Rotherham United on Saturday at High Wycombe.

Wycombe played against Crewe Alexandra in their last match. Crewe could score only one goal in the match while Wycombe scored three. Wycombe didn’t give Crewe a chance to get even in the match, ending the game with 1-3 FT score.

MK Dons played against Rotherham United in their last match. MK Dons scored two back-to-back goals in the second half of the match, taking the lead, which they maintained until the end of the match. The match ended in a loss for Rotherham with 1-2 FT score.

Wycombe has won consecutively in their last two matches and has scored over 2.5 goals in the match as well. They now stand 7th on the league table with 61 points from their matches. The team had a bit of trouble with their form since the end of January. However, their wins show they are back in form and will look to keep the streak going.

Rotherham’s loss in the last match has ended their 10-game unbeaten streak. They have exhibited strong performance in their matches. They are the top team on the league table and have earned 76 points from their matches. From the last ten matches, the team has only lost in one match and has secured wins in seven of them.

Wycombe’s four-game cold streak seems to have ended with their last win in home ground. The team has achieved some good results in their home matches this season even with the cold streak. Rotherham has also played well in their away matches. They are unbeaten in the last six matches and will look to keep the streak going.

Looking at the records, I believe the match will end in a win for Rotherham. Both teams have scored in their recent matches and can be expected to score in this match as well.