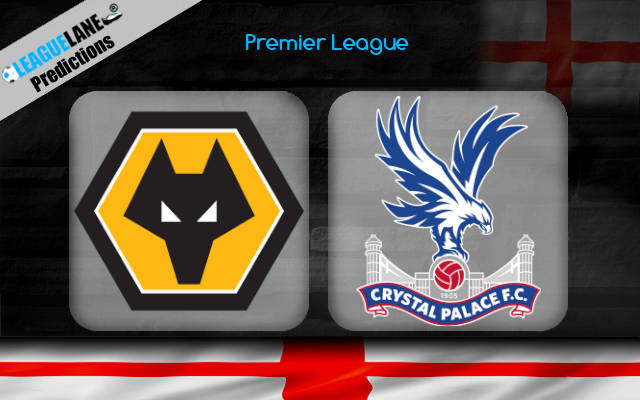 Wolverhampton Wanderers and Crystal Palace go head-to-head at the Molineux Stadium on Friday hoping to find some momentum.

Both teams are locked at 10 points after 6 matches with similar stats of 3 wins, 1 draw and 2 defeats. They are positioned at 8th and 9th in the standings respectively.

Last week, both teams had a go one step ahead last week, but it was Palace who made use of it and won 2-1 at Fulham. Meantime, Wolves despite taking the lead went on to settle for a 1-1 draw at this ground against struggling Newcastle United.

Despite similarity in form and various other statistics, the bookies picked home side as favourites at 1.90 odd, a draw at 3.40 and the visitors are huge outsiders at 4.20 odd.

We will take a quick look at the h2h and scoring pattern from their mutual meetings before taking the best tips based on predictions.

The Wolves won 2-0 in the same fixture of last season before drawing 1-1 at the Selhurst Park.

However the previous Premier League duels, that is 2018/19 season went down as away wins, Wolves winning 1-0 at Selhurst and Palace 2-0 at the Molineux.

So, the last 4 Premier League head-to-head matches between Wolves and Crystal Palace produced under 2.5 goals.

And this is my takeaway stat from their h2h over a decade. Their recent 9 meetings at this ground produced over 1.5 goals.

We expected better from Wolves this season, especially when they are not playing in Europe. However, this has been a poor show from the team managed by Nuno Espirito Santo.

Among the positives for the Wanderers is the scoring form of Raul Jimenez, who bagged 4 goals from 6 appearances.

On the other hand, Crystal Palace are inconsistent, yet they can surprise you when least expected. The thumping 3-1 win at Manchester United is a perfect example.

Wilfred Zaha remained at pick of things for Palace and net 5 goals so far, 2 of those came from the penalty spot.

These are some facts we took into consideration while analyzing this match. And evidently, this will be a tight game even though Wolves are firm favourites on paper.

Betting on full-time results for this Premier League match comes with high risk and we can see from h2h that only 1 of the last 4 EPL meetings between the sides resulted in a home win. Also Palace have won 5 times here in their last 11 visits, lost 5 and drew 1.

This brings us to the goal markets and from dropping odds trend, the under 2.5 goals is currently the favourite bet for most punters.

But my recommendation is to go for the over 1.5 full-time because the last 9 h2h meetings at this ground saw the same. And there is a chance for this match to see over 2.5 goals with the likes of Jiminez and Zaha in fine scoring touch.