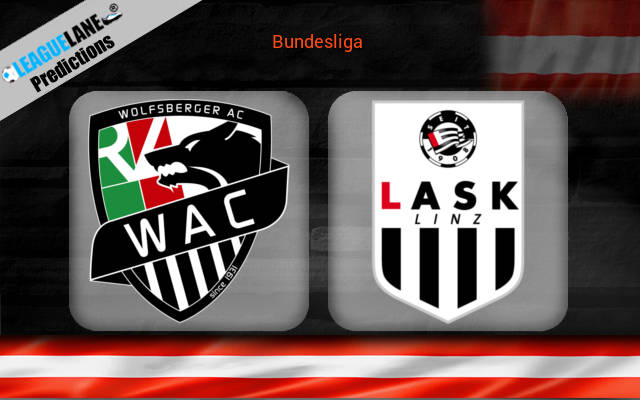 The last game week of regular season for Austria Bundesliga brings us the match between Wolfsberger AC and LASK on Sunday at Wolfsberg.

Wolfsberger AC played against Austria Vienna in their last match, in which Vienna scored the only goal in the match, leaving Wolfsberger AC goalless. The match ended in a loss for Wolfsberger.

LASK played against Salzburg in their last match. Both teams failed to score in the match, ending the game in a goalless draw. Even with ten players, LASK held their fort well to end the match goalless.

Wolfsberger had played well in their matches. Even though the team’s most recent matches have ended in losses, they can’t be taken lightly. They can hop back into their form at any time, just as they have done in the past. Their form has put the team third on the league table with 34 points to their name.

LASK’s recent performances show an improvement in their form. They are unbeaten in their last five matches, helping the team move up the table to the 8th position on the league table with 25 points. From the last ten matches, the team has scored in eight of their matches, in which four of them ended with wins.

Wolfsberger is one of the top contenders in Bundesliga this season. They have found six wins in their last ten matches. Also, the team has scored goals in the first half of the match and can be expected to score in this match. LASK had not performed well in their matches until recently. The team had not had an unbeaten streak of over two games until their most recent matches.

Wolfsberger’s home matches had a rough start but has found their form recently. They are on a win-streak at the moment which last for five matches. LASK’s road trips have had only three wins so far. They will hope to take advantage of the momentum from their wins in the last two matches to earn win in this match as well.

However, Wolfsberger has shown is the better team of the two and has more chance of winning the match. Both teams have a tendency to score in their matches. So, we can expect the matches to end with over 2.5 goals as well.