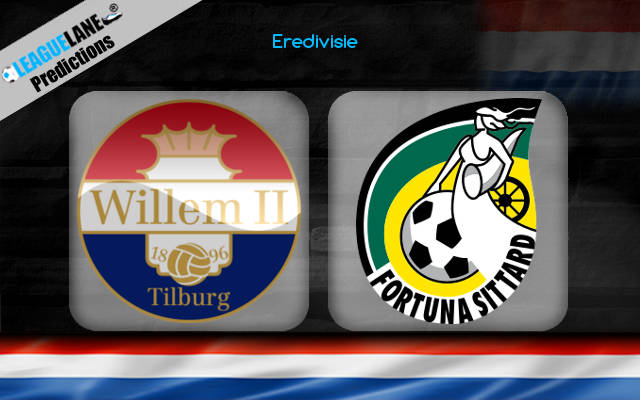 Eredivisie phenomenon welcomes second worst defense of the league in Tilburg hoping to extend their winning run on Saturday night.

In the Wednesday night’s all Eredivisie affair, Willem II continued their excellent form with a comfortable win over Sparta Rotterdam in second round of KNVB Cup.

Currently on a four-game winning streak, Adrie Koster’s men sit proudly at 3rd, point off PSV at fourth and nine points behind leading duo and game v Fortuna is a perfect opportunity to round up fantastic year with a celebration.

In eight home games, Tilburg side recorded five wins, a draw and defeats v Vitesse and Feyenoord early in the campaign. They’ve scored 12 goals while allowing seven past them, with only Ajax and AZ being better than them in this category.

Fortuna dusted off PEC Zwolle, winning 3-0 at Sittard, successfully qualifying for the Cup’s next round.

Interestingly enough, that was their seventh consecutive victory at home, with five of them being in the Eredivisie. Superb run at their ground was just about enough to place them at 14th place in league, three points away from first team below the line.

Their home and away forms are night and day. On their travels, to this day, Sjors Ultee’s men are still without a win, managing one draw only in eight games, with a ridiculous 5:30 GD.

Fernando Lewis is out for a season for Tilburg side while João Queirós is still battling hamstring issues.

Many have underestimated Willem II this season, myself included, but not anymore. Against Fortuna they’re clear favorites and should end up this year in style, getting another one on the board.

I’d also go with Over 1.5 goals in the first half as Tricolores prefer to get their business done early and considering Fortuna’s leaky defense…