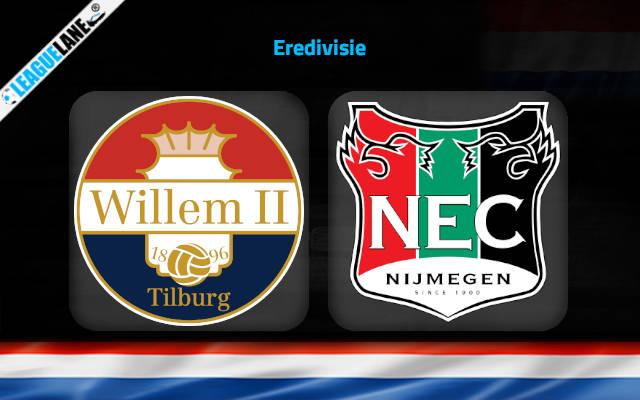 With 4 points and 2 spots in the difference, the 2 teams are set to clash this Wednesday night at Konig Willem II Stadion.

Willem II hasn’t tasted a victory in the last 10 Eredivisie games and moreover losing 7 games in a row, seriously need an urgent win to escape from crash landing into the relegation zone.

From a previous win, the Nijmegen squad hopes to repeat the same as they travel to face-off the hosts this Wednesday.

NEC is at the 10th spot on the standing with 22 points from 17 games. They won 6 fixtures while drawing on 4 and losing on 7 other occasions. They have scored 23 in total while taking in 26 exposing their deteriorated defensive maneuvers.

Nijmegen has been scored against in 5 of the previous 6 games while netting the opponents post a total of 9 times. After a hat-trick run of defeats, they finally managed to secure an away win against G.A. Eagles by 2-0 in the last league fixture.

The Super Pitchers is at the 13th position on the table with 18 points in hand. Of the 17 matches played, they won only on 5 games while drawing another 3. They lost on 9 occasions with conceding almost double the numbers as scored ones marking at 18:35.

A 10 game win-less streak, while losing their last 7 on the bounce, has seen Willem II to go from title challengers to enter into a mode of league survival. Their latest defeat came under Alkmaar by 1-4.

The hosts haven’t won at home in the past 4 league matches besides that, NEC remain unbeaten by Willem II in games played away from home for the previous 6 league matches. Therefore a victory for visitors is highly probable to happen this Wednesday night.