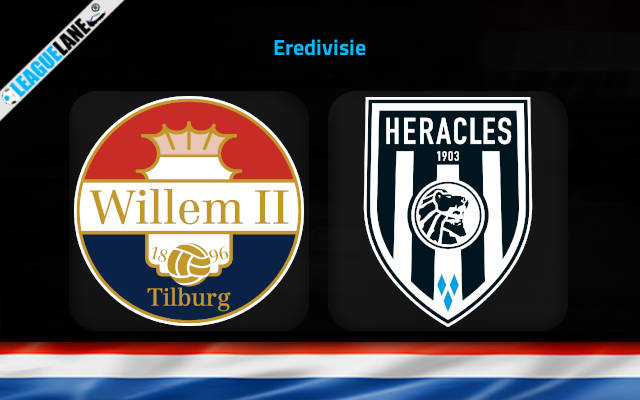 Willem II host Heracles in Matchday No 32 of Eredivisie on Saturday evening at Koning Willem II Stadion in Tilburg.

The hosts will be hoping to pick up precious salvation points here but their form does not suggest such a scenario.

The team led by Kevin Hofland are just not capable of keeping things quiet at the back these days.

They lost three of the previous four Eredivisie outings, conceding two or more goals in four of the last five league matches they played.

Willem II will go into this tie off the back of a 4-2 loss to PSV in Eindhoven. They have allowed four goals in two of the last three league fixtures.

However, head coach Hofland will base his optimism on the fact that his men are undefeated in the last three Eredivisie games in Tilburg.

They could face a big challenge in an attempt to make it four on the trot knowing that Heracles will enter the game in high spirits after clinching four out of six possible points in the previous two matches.

Heracles showed a great defensive form, conceding just one goal in the last two games despite facing the likes of Groningen and Twente in the process.

They held Twente to a 1-1 draw last weekend although striker Anas Ouahim was sent off as early as in the 16th minute of the affair.

Heracles have been dreadful on travels throughout the whole season but they will travel to Tilburg on the back of two straight clean-sheet wins on the road.

Although the hosts are in a much greater need for points, we just love how Heracles looked in the previous two rounds and we will back the visitors to claim the spoils at the sky-high 3.40 odds.