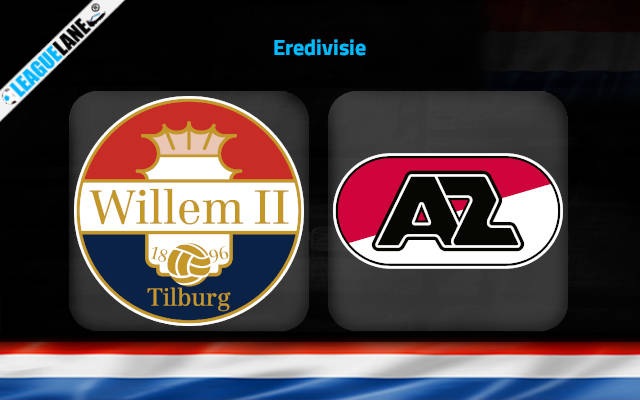 AZ Alkmaar’s 5-game winning streak has been suddenly ended last week in the league soon after their Europa Conference League exit. Leading the Conference League Play Offs zone, they need 4 point to catch up Feyenoord who are in the ECL zone.

Willem II has the most losses in the league leveling with Zwolle and are currently battling relegation. With 4 of their last 5 games ending in a defeat, they hope to do better at Konig Willem II Stadion this Sunday while facing AZ for the 27th Round of Eredivisie.

AZ is in the 4th spot on the standing with 51 points from 26 games. They won 16 times in the league while drawing on thrice and losing on 7 other occasions. A period of 14 straight games without a loss at half time marks the league campaign of the visitors.

Alkmaar lost their previous league fixture by 0-1 to Twente ending their 5 straight wins in the league. They have been scored against on all of their last 6 matches, seeing opposing sides hit 8 goals overall.

On the other hand, The Super Pitchers resides at the 16th position on the table with 22 points. Of the 16 matches played, they won only 6 games while drawing on 4 and losing on 16 other occasions. Their total goals to conceding ratio stands at 21:44 showing their far from perfect defense.

Willem II will be looking to improve on their last outing here following a 0-1 Eredivisie defeat in their last game at the hands of Fortuna Sittard. They have seen failed to score in their last 5 matches in the league while winning just 1 of their last 19 league fixtures.

We feel that an away win is likely to occur as they won the last 3 h2h fixtures in a row while undefeated in their last 6 games on road. Furthermore, the hosts are without a home win in the past 2 league matches.