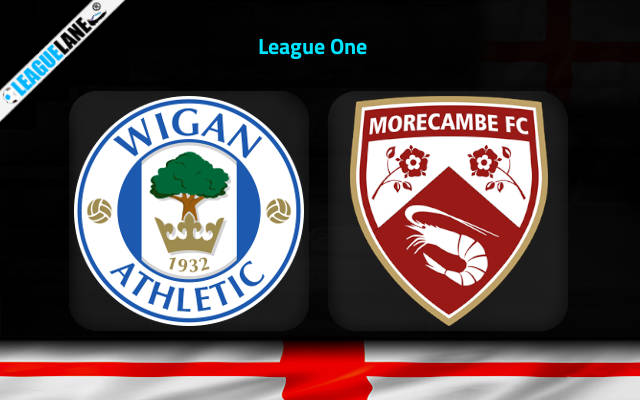 In game week 39 of League One, Wigan Athletic faces Morecambe for their next match on Saturday at Wigan.

Wigan Athletic has performed well in their matches throughout the season, with only a few losses from their matches. Wigan played their last match against Crewe Alexandra, in which Wigan scored two goals while Crewe could score none, ending the match in a win for Wigan with 0-2 FT score.

With the win in the last match, the team is currently unbeaten in their last four matches and will hope to keep this streak going. From the last ten matches, the team has scored in over half the matches and has secured wins in six of them as well. Their strong performance has placed the team second on the league table with 76 points from their matches.

Morecambe has not had the best season this year. They have played poorly in their matches, earning wins in only a few of their matches. Their last match against Shrewsbury ended with the opposition scoring over five goals in the match while Morecambe ended the game goalless. The match ended with 5-0 FT score.

With the loss in the last match, the team’s cold streak has increased to eleven consecutive matches. Their poor performance has put the team second in the relegation zone with only 32 points to their name.

Wigan’s strong form makes them a formidable opponent for Morecambe. Morecambe has not played well in their recent matches and will have a very tough time in this match.

Wigan has played well in their home matches with only one loss in the last ten home matches, while Morecambe’s away matches have not produced the results the team had hoped for. The team has only two wins to show from all their away match this season.

So, the match will most likely end with a win for Wigan. Looking at the records, Morecambe has failed to score in most of their recent away matches, making it possible for the match to end with a clean sheet for Wigan.