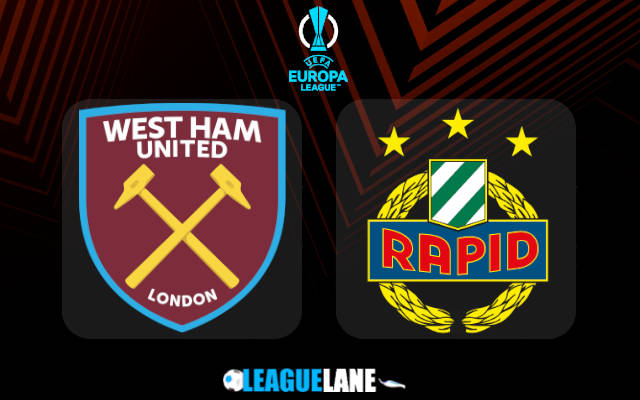 West Ham are massive favorites to keep the perfect record after Gameweek No 2 in the UEFA Europa League as they play host to Rapid Vienna on Thursday evening at London Stadium.

Rapid Vienna are not pulling up any trees ahead of the trip to English capital. They sit second from bottom in the Austrian Bundesliga standings after a thread of three consecutive defeats in the domestic league.

The head coach Dietmar Kuhbauer (has been in charge of the club since 2018) is under a huge pressure, but it is very hard to believe that his men can end a dreadful series of results here against the Premier League opposition.

Rapid Vienna lost four of the last five matches in all competitions. The latest of the failures came on Sunday when they were brutally outplayed by Sturm Graz, losing 0-3 at home on the occasion.

Besides the narrow 1-2 win over Admira in the Austrian Cup, Rapid Vienna have not scored a goal in three subsequent matches across competitions.

The streak includes a 0-1 home defeat to Belgian Genk at the beginning of their UEFA Europa League group stage campaign.

The story is completely different with West Ham who began their Europa League journey with a confident 0-2 victory over Croatian champions Dinamo Zagreb on the road.

Michail Antonio and Declan Rice made the difference for the Hammers on the occasion. Antonio has generally been flying high at the beginning of the season, scoring five goals in five Premier League appearances this term and providing three assists at the same time.

Antonio scored a beautiful goal in the weekend’s 1-2 victory over Leeds United- Nevertheless, we would not be surprised to see David Moyes giving his main striker a rest here against such an opposition, so be careful with your stakes on the anytime goalscorer market.

The Hammers and Rapid Vienna did not play each other in the past.

West Ham should be in full control from the first whistle to the end and we expect them to pick up an easy clean-sheet victory here (just as they did on the opening day in Zagreb).

The home win to nil is well worth backing at the 2.05 odds knowing that Rapid Vienna have not scored goal in three of the last four outings across competitions.