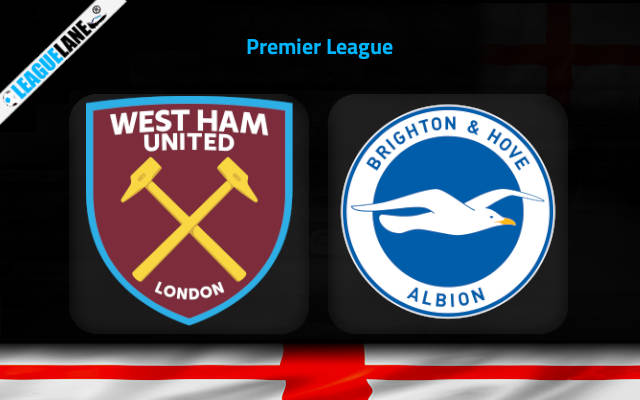 West Ham and Brighton will play each other in one of the most exciting games of the third round in Premier League on Sunday afternoon at London Stadium.

The Hammers will be searching for their maiden points in the new season on the occasion, having lost both matches so far.

The inaugural round’s defeat to Manchester City can hardly be considered a failure for David Moyes, but his troops certainly dropped the ball in Gameweek 2, falling 1-0 away at newly-promoted Nottingham Forest.

The Hammers did not look as bad at The City Ground as the result may suggest as they missed numerous chances in front of Dean Henderson’s goal. Declan Rice even missed a penalty-kick on the occasion.

West Ham will have a very challenging task to get the victory here against Brighton who left a super impression in the opening two rounds.

The Seagulls have a return of four points from the inaugural two matches against Manchester United and Newcastle.

They well deserved to beat the Magpies eight days ago at The AMEX as well, but Nick Pope had an amazing day for Newcastle on the occasion.

We were particularly impressed by Graham Potter’s defense as Brighton barely allowed any chances in the opening two fixtures against two decent offensive sides Man United and Newcastle.

West Ham will face hard times trying to bounce back from the poor start to the season here against Brighton who are a very solid team.

The visitors are very tough to break down, they offered great displays in the inaugural two games, and they are about to face the Hammers who have failed to find the back of the net in their opening two outings of the season. We will go with the Under 2.5 goals FT at the 9/10 odds as well as the draw at the 3.40 odds.