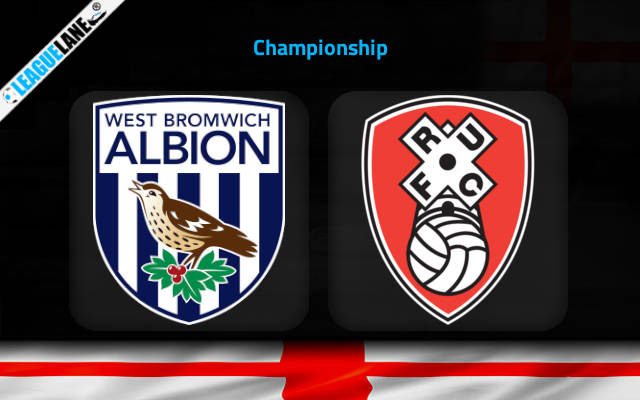 West Brom vs Rotherham Predictions and Free Tips from our expert tipsters when the teams go head-to-head in Championship on Saturday, 17 December 2022.

Despite being in the seventeenth position, West Brom are the most in-form team presently. They are on a four-game winning streak. They defeated Sunderland last time by 2-1. The reason behind their recent resurgence is their solid defensive performance against top teams.

At the same time, Rotherham conceded their eighth defeat of the season as they lost to Bristol City. They are just one place below their current counterparts. The only positive result they picked up in recent times was the 1-0 victory against Sheffield United.

The host are unbeaten in the last three head-to-head meetings. Both teams will be playing against each other after a period of over three years.

Rotherham last won this fixture way back in 2004.

The host also have a decent unbeaten record at their stadium against Rotherham, they are unbeaten in three of the last four meetings.

Who will win the match between West Brom and Rotherham?

We are backing West Brom to take all three points from this game. They have made tremendous progress in the last two months. Also, they are on a four-game winning streak as well.

At the same time,  the visitors are winless in three of their last four away fixtures.

The host have scored at least two goals in their last two wins against this team.

In the last five head-to-head meetings, both teams have scored on just one occasion. The visitors have struggled to score in this fixture. Therefore, we expect the same trend to carry on this time as well.

The first tip is that Daryl Dike to score anytime– at 2.40 odd. He scored a brilliant header last time in the comeback win against Sunderland. We can expect him to find the back of the net against Rotherham.