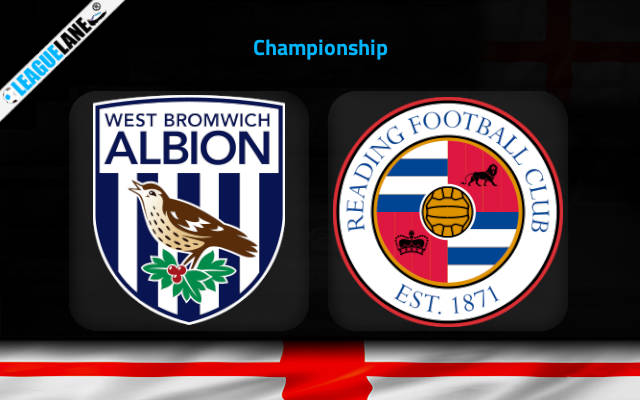 West Brom is in the third spot already in the spot for Championship playoffs. The visitors are far below them with another loss could probably crash land them to the relegation zone. The hosts set up their home ground at the Hawthorns to welcome the guests hoping for win in order to acquire the Premier league spot.

The Albions reside at the 3rd spot in the zone for Championship Playoffs with 37 points in hand. From the 21 matches played they won 10, drew 7 and lost 4 fixtures. They score on less amounts at 29 while conceding only 17 which is the lowest in the league.

West Bromwich Albion come into this game on the back of a 2-1 win over Mark Robins’ Coventry City in the league. Fewer than three goals per game were recorded in 5 of the their last 6 meetings. They totted up 4 while the opposition scored 3 from the previous 6 league games.

Reading is at the 20th spot with 21 points. Of the 21 matches played they won 7 while drawing on 3. Their loss numbers are higher standing at 10 with goals to conceding ratio at 27:33 so far. They drew the last match against Hull by 1-1.

They have been scored against in 6 of their last 6 games, letting opponents get 7 goals in total. They are also not defeated in their previous 2 away league fixtures.

West Brom are unbeaten in their previous 10 league matches at home and are also not beaten in the league by Reading in their last 4 games. Reading at home provides the perfect platform for them to back that up with another positive performance.

The visitors are no pushovers, particularly when considering that they have picked up four points from their last two league games. However, the new found confidence and strength-in-depth of West Brom should shine through here and a home win has to be favored.