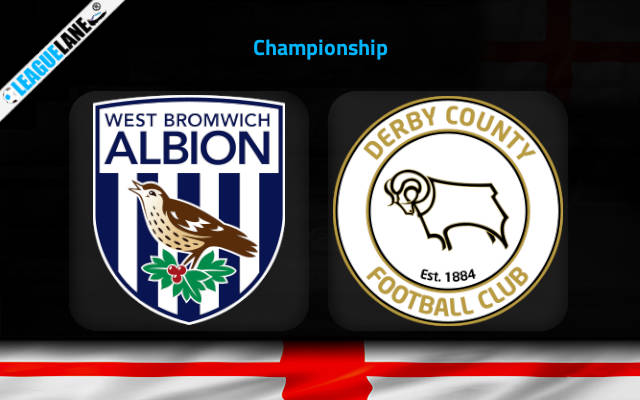 West Brom have been the best team in the Championship so far, and are placed at the top of the table. Meanwhile, Derby have been one of the worst, and have been a mess on the road for the past several months. As such, expect the former to have the edge this Tuesday.

Brom were relegated from the Premier League at the end of the last campaign, as they finished 19th in a table of 20. They were totally out of place in the top flight, as they could manage to deliver just five wins.

However, the story has been totally different in the second division. Not only have they raced to the first position in the standings, but they have maintained an unbeaten run so far, and have scored the second-most number of goals in the competition as well.

In the meantime, Derby had narrowly avoided relegation the last season in the Championship, as they finished 21st in a table of 24 – with a one-point lead over the relegation cut-off.

And this time around, they have a 100% winless record so far disregarding a single fixture, and no other team has scored fewer goals than them as well.

As things stand, expect a win for West Brom at the Hawthorns.

West Brom were held to a 1-1 draw the last match-day by Millwall. In the meantime, Derby lost 2-0 on the road against Birmingham.

Going on, Brom were unbeaten in 10 of their past 11 overall games, and seven of these were wins. They have also failed to score just once at home in the past six-month period, and it was against Arsenal in the EFL Cup.

On the other hand, their counterparts were winless in seven of their preceding eight overall match-ups, and they had failed to score in two of their former four fixtures. Moreover, they had also lost 12 of their past 15 road trips.

Taking into account these observations, as well as recent h2h stats, expect a win for West Brom this Tuesday at their home.