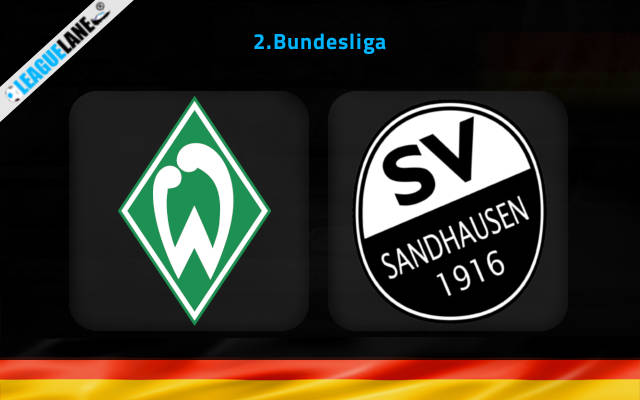 Werder Bremen have played well in their matches throughout the season. The team has won in more matches, both their wins and draws combined. From the last ten matches, the team has got eight wins, one draw and one loss. Their strong form has put the team in the second position on the league table with 51 points from their matches.

Bremen played their last match against Darmstadt, in which Bremen scored the only goal in the match in 52’minute and maintained the lead until the end. The match ended with 1-0 FT score.

Sandhausen has shown inconsistency with wins in their matches this season. They can’t seem to find wind in their matches. They have amassed more draws than wins in their matches. From the last five matches, the team has got one draw, three draws and one loss. Their performance has affected their standing, placing the team in the 15th position on the league table just two-points away from the first team on the relegation zone.

Sandhausen’s last match against Rostock recorded a 0-1 loss for the team. Rostock scored their goal in the beginning of the second half itself and maintained the lead until the end.

Sandhausen will have a tough time when they face Werder Bremen. Bremen have played well in their matches this season and have lost in only a few of their matches. Sandhausen’s poor performance has put them in the bottom half of the table. Even though the team scores in most of their matches, they can’t seem to find wins in them.

Werder Bremen have played well in their home matches. They are unbeaten in their last nine matches and will hope to keep this streak going. Sandhausen’s recent matches have brough in an unbeaten streak for the team. The team has not lost in their last six away matches.

Looking at the records, the match is more likely to end in a win for Bremen. Both teams have scored in their previous matches and can be expected to score in this match as well, ending the match with over 2.5 goals.