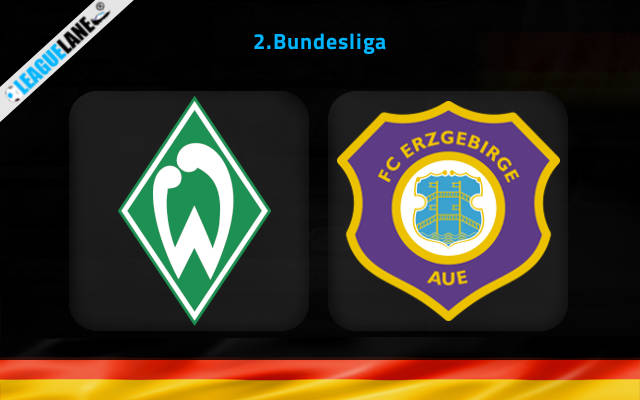 Both the teams are looking for a win in the upcoming fixture as they both lost the previous game. Erzgebirge Aue will be most pressured between the two as they are at the brink of getting into the relegation zone. Bremen is looking to turn the tables as they host the Green-Whites at their home of Weserstadion this Friday.

The visitors sits at the 15th spot with 14 points in hand. From the 15 matches they played, they won only 3 while drawing 5. They lost 7 matches while conceding a total of 22 goals with netting only 14.

Over the course of their last 6 outings, they have amassed a sum of 8 goals while conceding 6. they have also not failed to score on each one of those occasions.

The home team sits at the 10th position with 20 points. Of the 15 matches they played, they won, lost and drew 5 games each. They score goals but also concedes the same amount resulting in at 21:22.

From their last 6 games, Werder Bremen have seen their goal breached in 6 of them in addition to getting on the score sheet in 5 of those matches.

Both the teams lost the previous fixture by 1-2 with Bremen against Kiel and Aue against Darmstadt. The home team is unbeaten in their previous 3 home matches while the visitors are undefeated in their previous 2 away league fixtures.

We anticipate that the home team will have the majority of possession in the game and will turn some chances into goals while the visitors will struggle a bit, but the pressure might make them do the work and turn things around. However scoring from both sides can be seen.