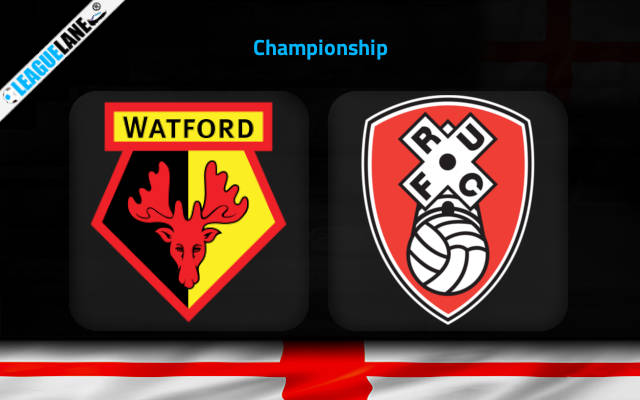 Watford vs Rotherham Predictions and Free Tips from our expert tipsters when the teams go head-to-head in Championship on Saturday, 21 January 2023.

Watford are third in the league and have performed well in all of their league matches this month. However, they are out of the FA Cup as they lost to Reading by 2-0. They quickly bounced back with a victory as they defeated Blackpool in their most recent outing.

Meanwhile, Rotherham surprised everyone as they defeated Blackburn by 4-0. Earlier they were on a seven-game winless run. The main concern for manager Matt Taylor will be the fact that his team have not won an away game since November.

The previous records show that, the last time the visitors won this game was nearly two decades ago. Both teams last met back in September 2022 and the game ended with a 1-1 scoreline. At this ground, the host are on a two-game winning streak.

Who will win the match between Watford and Rotherham?

The host are third in the league and have won three of their last five outings. Therefore, the chances are high that they will win against this team. Do note that Rotherham are very close to the relegation zone.

With just two exceptions, the last seven head-to-head matches ended with not more than two goals being scored.

Also, both teams have scored consistently in this fixture since 2021. They have both scored in their most recent league match as well. We can expect the same pattern to follow up this time as well.

The host have won by scoring at least two goals in their last four wins against Rotherham. In their most recent outing as well they scored two goals against Blackpool. Therefore, our first tip is that Watford will win this game by 2-1– the odd for this tip will be at 8.50 odd.

Moving on, our second tip for this game is that both teams to score – at 1.90. In the last two meetings, both teams have scored a combined total of seven goals. Do also note that the visitors managed to score four goals against one of the top teams of the league just recently.