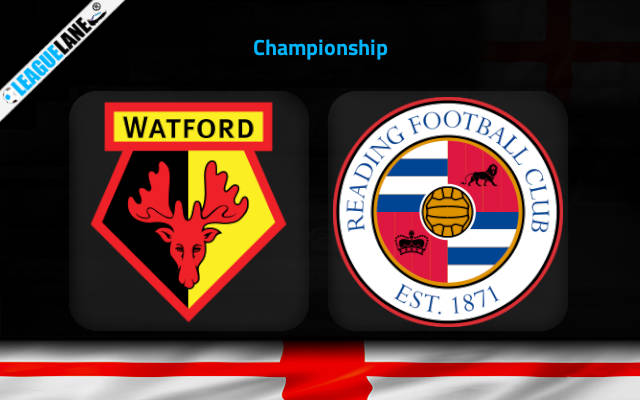 Two heavyweights of the EFL Championship namely Watford and Reading will lock horns this Saturday at the Vicarage Road. Spectators can expect an action-packed ninety minutes in this game.

It is worth knowing that both teams are in excellent form this season. Watford played in the Premier League last season, it is important to mention that they lost one game this season. Also, they are unbeaten in their last two league outings.

Vokoun Bayo’s goal in the 33rd minute helped the Hornets snatch a point against Rotherham in their most recent game. Also, they managed to score five goals in their last three games in the EFL Championship.

On the other hand, Reading are yet to draw a single game in the Championship this season. They have won five games in total this season.

League leaders Sheffield United put four goals past this team on match-day 6. It was a very disappointing result for the Royals. However, the team managed to win their next game which was against Stoke City. Lucas Joao scored a brace in that game.

This season the team led by Paul Ince have scored nine goals in the league, which places them in the third position of the league table.

It is shocking to find out that Paul Ince and his men have a goal difference of -2 this season, yet they are in the top three in the table. The team conceded eleven goals this season.

Meanwhile, Rob Edwards and his boys could overtake Reading if they manage to secure a win.

Considering both teams, spectators can expect this fixture to be a high-scoring game. It is important to mention that the host only won one of their last five league games.
Moreover, Lucas Joao is the top scorer this season for Paul Ince’s team.

Our prediction is that Watford will win this game with Over 2.5 goals – at 2.20 odd. This is after considering that at home Hornets have scored six goals In their last two matches against Reading, also they are unbeaten at home against Royals.

Also, our second tip for this game will be Vakoun Bayo score anytime- at 3.60 odd. Burnley scored three goals in the first half in two of their last three outings.