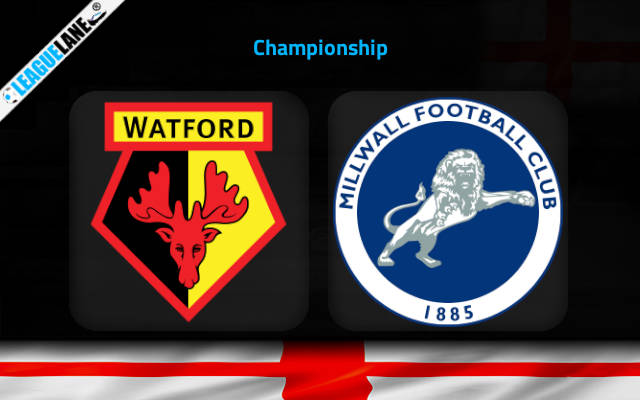 Watford vs Millwall Predictions and Free Tips from our expert tipsters when the teams go head-to-head in Championship on Monday, 26 December 2022.

Watford got their tenth victory of the season as they defeated Huddersfield. This win helped them climb up to the fourth position on the table. Moreover, they remain unbeaten in the last four matches.

At the same time, Millwall could not get past Wigan and were held in a 1-1 draw. They are facing a winless drought as the last time they won a league outing was on the 12th of November.

Millwall won this fixture back in October. However, at Vicarage Road they have struggled to perform against Watford. The host are on a three-game winning streak at Vicarage Road. The visitors are yet to win an away game this month.

Who will win the match between Watford and Millwall?

We are backing Watford to take all three points from this game. They have an excellent unbeaten record against this team at their home ground. Moreover, they are on a four-game unbeaten streak in the league as well.

Do also note that Millwall struggled to perform recently against a relegation team last time.

On various occasions, both teams have struggled to score in this fixture. At Vicarage Road as well both teams have scored in just one occasion out of the last four meetings. Therefore, we expect the same trend to carry on this time as well.

The first tip is that Watford will win this fixture– the odd for this tip will be at 2.05 odd. They have performed well when they play against Millwall at Vicarage Road. Moreover, they are unbeaten in two of the last three matches as well. Do also note that the visitors could not defeat a relegation team last time.

Our second tip is that Joao Pedro to score anytime – at 3.75. He played well against Huddersfield recently as he scored a brace. Moreover, he is the top scorer for Watford this season with eight goals to his tally.