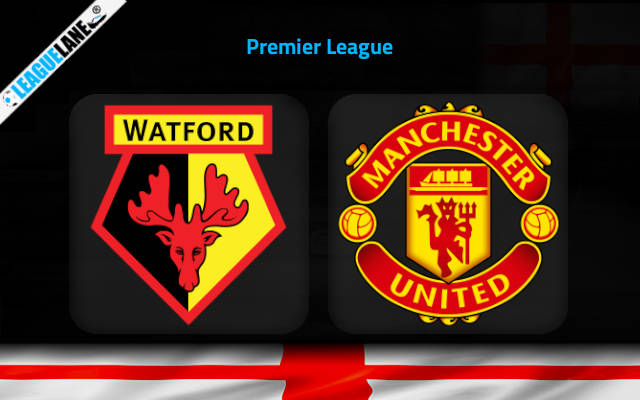 Manchester United travel to Watford on Saturday in a must-win match with Ole Gunnar Solskjaer’s future hanging on a thread.

The Red Devils were comprehensively beaten by cross-city rivals Manchester City by a 2-0 margin in the last round. The final scoreline could have been much more embarrassing if not for De Gea heroics. Any who, the defeat pushed them down to 7th in the league, now out of the European qualification zone by three points.

And “surprise” and embarrassing the same time for Red Devils fans that Arsenal are sitting above their team.

Meantime, Watford was beaten by Arsenal 1-0 and their gap with the bottom three is now cut short to 3 points. They have now lost 4 of the last 5 and evidently, the appointment of Claudio Ranieri is yet to pay off.

So, both teams are coming on the back of some negative results. But Manchester United have all the riches and a strong squad and it is up to them to avoid an embarrassment on Saturday.

This will be Ranieri’s fifth game in charge as Watford manager and the team is yet to gel into a unit. This may take a while and the fixture against United come at a bad time with the team scoring in just 3 of their last 10 Premier League games.

Thus, Manchester United to win at Vicarage Road on Saturday is a banker bet, the price of 1.50 odd is decent too considering the poor form of the home team.

As an alternate bet, we can take the over 2.5 goals full-time. United doesn’t seem to have problems in the scoring department and this fixture has a history of producing high scoring games.