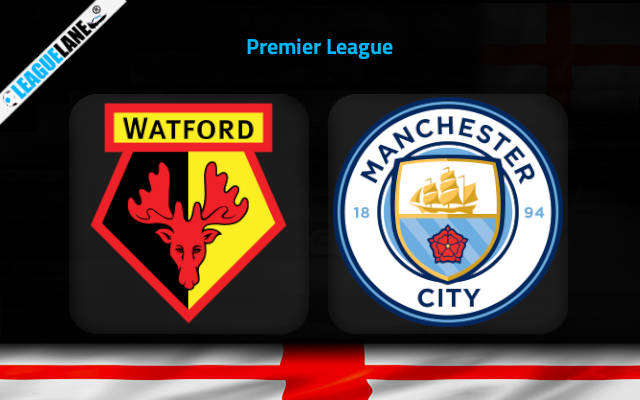 Manchester City have kicked into top-gear, and they are going after the top-most spot currently in possession of Chelsea. As of now, the Blues have a lead of just one point, and they have to take on the in-form West Ham, who are placed fourth.

This is the time for Pep Guardiola’s men to make a push to get to the top of standings. And fortunately for them, they are pitted against one of the worst teams in the English top flight – Watford.

By all means, expect a huge win for the reigning English champions at the Vicarage Road this Saturday.

Watford lost 1-2 on the road the last match-day, against Chelsea. They had lost four of the past five fixtures, and had lost five of the previous seven home appearances as well.

They have been conceding goals in plenty all through this campaign, and importantly, they are a team that were promoted to the top flight just at the end of the last season.

On the other hand, City recorded a 1-2 win on the road against Aston Villa. They had also won 15 of the former 20 fixtures, and their only defeat on the road since August had come against PSG.

Considering these observations, as well as past h2h stats, expect a win for Manchester City this Saturday.

Tips for Watford vs Manchester City