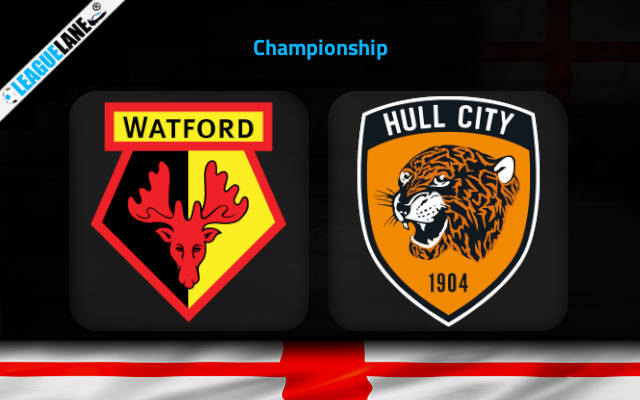 Watford will continue their push for the Premier League football on Sunday afternoon when they host Hull City at Vicarage Road.

The team led by Slaven Bilic moved to the fourth place in the Championship table after snatching four victories in the previous six rounds.

They are five points behind Sheffield United in the second position and they can ill afford home slip-ups against the teams of Hull City’s caliber if they want to stay in contention for the automatic promotion.

Bilic can be particularly pleased with the improvements his team made in defensive line as the Hornets allowed no more than two goals in the previous six league matches.

We also have to praise Watford’s fine home form since the Hornets managed three wins in the last four league outings at Vicarage Road.

The story is completely opposite with Hull City. They are just one point above the red zone and they will have a mountain to climb in the quest of avoiding relegation this season.

The Tigers lost three of the last five league matches. They conceded 19 goals in 10 away outings this term.

However, we must say that Liam Rosenior’s troops offered much better displays on the road than at home in the recent period.

The Tigers will thus travel to Vicarage Road on the back of three victories and a draw in the previous away outings in the league.

Watford have been on a great run of form of late. Their manager Bilic knows how important it is to be winning this type of games for an outfit that is chasing promotion.

Since the Hornets have been very tough to break down of late, we will take the 2.62 odds offered for the home win to nil pick here.