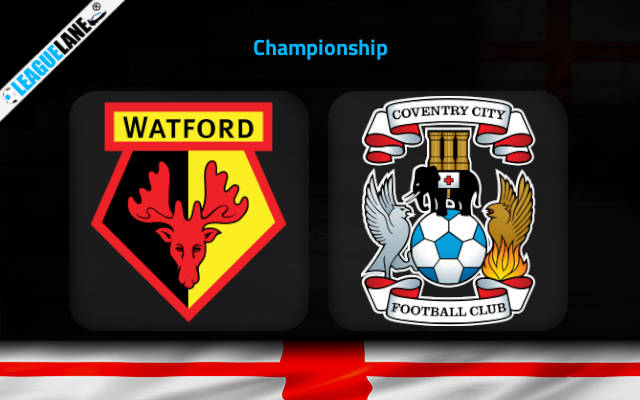 Coventry got their much-needed win when they defeated Blackburn Rovers by 1-0 most recently. Now, they have a huge challenge ahead of them as they will play against Watford at Vicarage Road.

The host have the second-best form in the league only behind league leaders Burnley. In most recent outing, they defeated Cardiff City by 2-1.

Ismaila Sarr’s goal in the 59th minute was enough for the host to secure all three points. They have won three games back-to-back. Now the team is just one win away from overtaking Sheffield on the table ranking.

The main reason behind Coventry’s resurgence is that they have a very good record in their away matches this season. The last time they lost an away fixture was over two months ago. The team is currently at the 20th position on the table.

Mark Robins’s side have performed well against top teams in the Championship this season. They have defeated Sheffield United, and Blackburn Rovers recently. Moreover, they have only lost once in their last five league outings.

It is important to note that nearly 40% of the matches have ended in a defeat for Mark Robins and his men this season.

At the same time, the host have lost three of their last seven home matches. They have not performed consistently at Vicarage Road.

You can back the following as our first prediction is that Watford will score over 2.5 goals – at 4.00 odd. This is after considering that the host have scored at least three goals in their last two consecutive victories against Coventry.

Also, our next tip for this game is that Watford will keep a clean sheet – at 2.50 odd. In two of the last three overall head-to-head encounters, the host have kept a clean sheet.