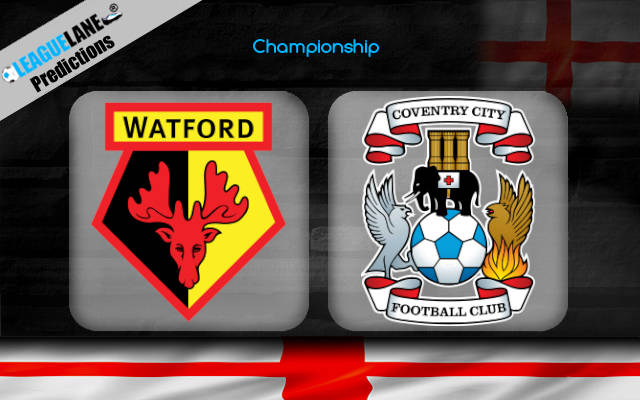 After three winless games in their championship schedule, Watford is back on track with a win. The 3-2 win at home against Stoke City in the previous encounter was their 5th win in the ten appearances so far this season in the campaign. Having lost only 2 games, the Hornets have picked up 18 points in the table.

Coventry hasn’t made the best of their promotion to championship from the League One fixture. The Sky Blues have lost three of the recent four fixtures in their league schedule. Besides, they will visit after a 2-1 loss on the road against Nottingham Forest last time out in the championship.

Watford is on a five-game unbeaten streak in their home matches, with two clean sheet wins in it. The host had only one draw in that unbeaten run, and the recent three clashes saw BTTS in all. This suggests that the Hornets enjoy the ground advantage in the game.

On the other hand, Coventry has been winless for the past five outings in the championship schedule. The away team has a poor form on the road and is also a promoted team in the mix. Defeating a relegated team with the Premier League experience is easier said than done for the Sky Blues.

The home win in full-time will probably be the best bet for the punters in the encounter regarding both team’s position in the table and their overall form. Along with that, the tip for Watford to win either half in ninety minutes will also come in handy to yield decent returns from the encounter.