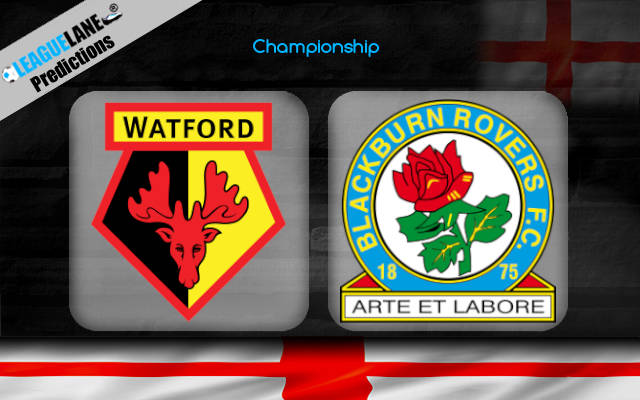 Watford welcomes Blackburn Rovers this Wednesday night at Vicarage Road, hoping to put an end to inconsistency which is present since the season kicked off.

The visitors have really good stats in terms of efficiency, so it will be interesting to see how are they going to deal against a team which conceded only one goal so far.

The Hornets have won two thirds out of points in opening five games, which was enough for 5th place, just three behind the leaders Bristol City.

So the hosts are not looking bad, but considering team’s goal for the season is to win the league, form has to improve for upcoming big games.

These two teams have met only ten times in the past and stats are tied in almost all segments. The score in terms of victories is 4-4, while Watford have slightly better goal difference 17-15.

Total number of goals is 32, which averages exactly 3.20 per duel. Only three out of the last six meetings have ended Over 2.5 FT though.

The most recent encounter was played at this venue as well, back in 2015. Watford have won it narrowly 1-0.

As mentioned above, Watford have the best stats in the league in terms of defense. Efficiency is miles away from desired level though.

All three victories were achieved with identical 1-0 result, which is definitely not a bad thing.

The thing is Vladimir Ivic’s team will need more to compete for the top. The return of Ismaila Sarr might change that. Senegalese winger was injured for the first three duels, but made a comeback in the last two where Watford defeated Derby County and lost to Reading.

Troy Deeney is also back, so we might see completely different playstyle on Wednesday.

Blackburn Rovers definitely shouldn’t be underestimated, but their stats might be slightly misleading. They scored bunch of goals against weakest squad in the league Wycombe, but also won only one point from the last two appearances.

We are placing high stake bet on home win here, backed with Watford to keep a clean sheet option as well.