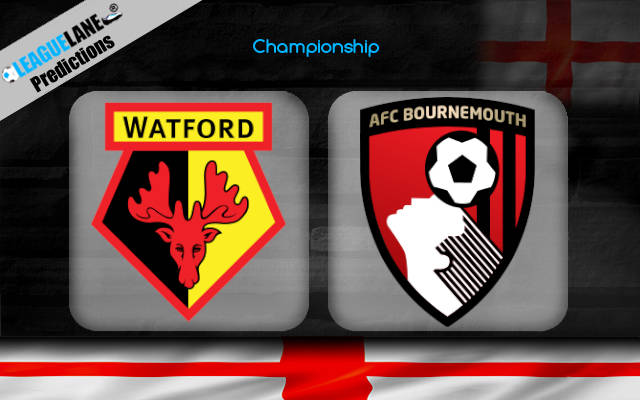 Watford beat Derby County (0-1) and Blackburn Rovers (3-1) in their last two outings and sit behind 2nd placed Bristol only for their goal difference – with 13 points to their name after six outings.

However, they’re in for a tough challenge on Saturday as they look to make the top 2 cut early in the campaign, hosting Bournemouth for their Matchday 7 clash.

Hornets have a perfect run on Vicarage Road to build on, though, and we’ve seen them beat Middlesbrough (1-0) and Luton (1-0) with two clean sheets since early September.

They will now want to put on a tough defensive setup too and we expect a narrow contest in the making with everything to play for despite a long way still ahead.

Bournemouth will be looking for an instant return to Premier League as well. They were held off by Queens Park Rangers (0-0) and Cardiff (1-1) in their last two outings and this could be more worrying.

Cherries have been scoring goals on the road quite regularly and we do feel they come to Watford looking to battle for points, which promises more excitement now as well.

Hornets have suffered just three losses to Bournemouth in 19 matchups total, though.

Bournemouth last bagged a win over the rivals in October 2018, with two draws and a comfortable home loss in January (0-3).

We hope to see Watford build on such records in head-to-head clashes but we feel they’ll have to outgun Bournemouth to secure the points. We will still back Hornets to do so and go for a Home win here at 2.25, which looks like the best approach to the fixture despite a tough task ahead for Vladimir Ivic’s men.

We expect a tight contest but with hope Watford will have to score an extra goal to bag a win, we’re also going for goals at Vicarage Road. We’ll back a high-scoring game with Over 2.5 Goals FT, which comes at 2.20 and has many in the know sticking their necks out for. We’ve seen three goals the last time these sides men and we’re now hoping for a similar outcome.