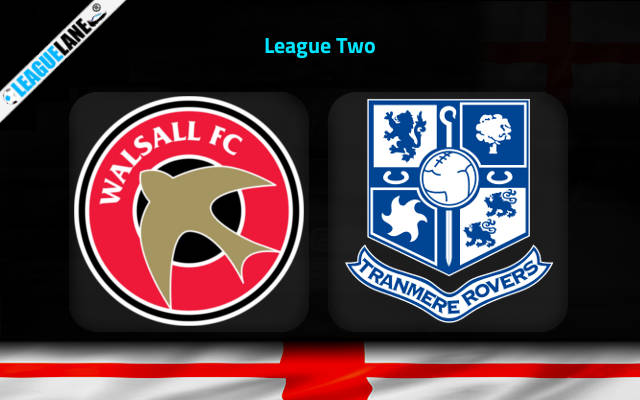 Walsall line up against Visiting side Tranmere at Bescot Stadium in a league Two fixture on Saturday.

Tranmere had finished 9th in a table of 24 and missed out on the League One promotion with the difference of 2 points.

They might had better hopes prior to this season. But things were different for them as they faced back to back defeats from the opening two fixtures. The team is struggling for positive consistency since then.

Going on, they lost 3 of the past 5 league fixtures and are currently in the 14th spot with just 10 points in the bag. Their goal scoring and preventing side doesn’t possess anything impressive too.

Meanwhile, Walsall had a season to forget in 2021-22, as they had finished 16th in the English League Two. Going on, the team did a better performance to the opening fixtures of this League Two season.

Bu that didn’t last long. They have lost 3 of the previous 5 fixtures and are currently at the 15th spot with just 9 points. The past four saw their defensive steel allowing goals.

The Saddlers were winless in 5 of their previous 6 appearances in front of the home crowd and had gone on a separate 5-fixture winless streak in the process.

On the other hand, Tranmere were winless in 4 of the previous 5 league fixtures on the road, and had gone on a separate 4-fixture winless streak in the process.

Both teams have and equally poor run of form in their respective patches. In that case, we are backing the Draw option as the main bet here. You can also go with the Both Teams to Score bet at the 1.83 odds considering the weak defenses of both.