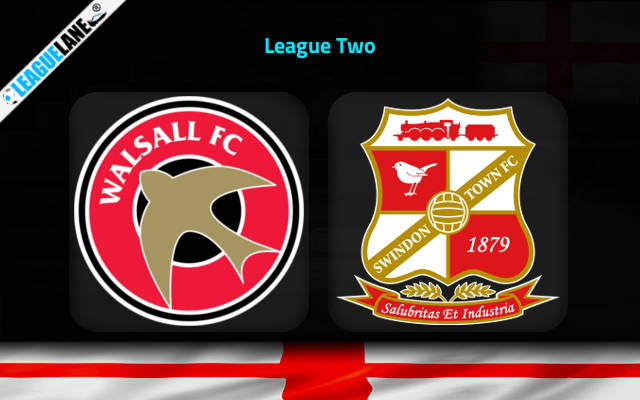 Walsall has played moderately well in their matches recently, achieving mixed results in the matches. From the last ten matches, the team has got four wins, two draws and four losses. With only one match remaining in League Two, the team has zero possibility of playing in the playoffs because they are twenty-points shy of the last team in the playoff zone. Currently, the team stands 15th on the league table with 54 points from their matches.

Walsall played their last match against Colchester United. Both teams scored one goal each, ending the match in a draw with 2-2 FT score.

The playoffs for League Two are just a hand distance away for Swindon Town. Swindon has played well in their most recent matches, earning wins in three consecutive matches. The team currently stands 7th on the league table with 74 points to their name. However, there are teams who still have an opportunity to play if they secure the win in their upcoming match. So, Swindon needs the win if they wish to play in the playoffs.

Swindon Town played their last match against Barrow. Swindon scored two goals in the match while Barrow could score only one, ending the match in a win for Swindon with 2-1 FT score.

Swindon Town needs the win in this match if they wish to secure the position in the playoffs. Walsall has played only moderately well in their matches and so can have a tough time when they play against Swindon.

Walsall’s recent home matches have shown some great performance by the team. The team has won consecutively in the last two h2h matches. Swindon Town, similarly, has played well in their away matches. They are unbeaten in the last three away matches as well.

Walsall’s performance in home matches makes it difficult to predict the match. So, we can expect the match to end in a win for Swindon or in a draw. Swindon has scored over 1.5 goals in most of the matches and can be expected to score so in this match as well.