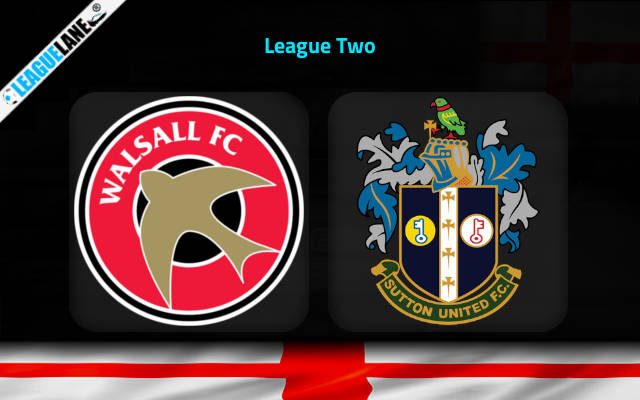 Sutton United are third in the line for promotion to League One after their back to back league wins. With Newport just behind them, there is a fight going on for the third spot. Walsall are on a 3-game unbeaten run in the league and has lost only once from the last 6 schedules. Hoping to extend their winning streak, The Saddlers host the Yellows at Bescot Stadium this Saturday.

The Yellows are at the 3rd spot on the standing with 57 points from 34 games. They won 16 times in the league while drawing and losing 9 games each. They scored 53 in total while conceding a sum of 39 thus far.

Sutton United will go into this game after a 3-0 League Two win to beat Rochdale in their recent fixture. Matt Gray’s men have seen their goal attempts be successful a total of 9 times throughout their most recent 6 matches. The number of goals that have been scored against them during the same clashes equals 5.

On the other side, Walsall resides at the 16th position on the table with only 40 points. Of the 35 matches played, they won and drew 10 games each while losing on 15 other occasions.

The home teams drew back to back league games against Northampton and Barrow. In their past 6 games, Neil McDonald’s squad have found the back of the net 7 times gaining an average number of goals per match of 1.17.

In their last 21 games across all competitions, Sutton United have been undefeated on 18 occasions meanwhile they won only once from their last 8 games on road.

Going into this encounter, The Yellows have not won away from home in their last 2 league matches. Even though Walsall won on the last h2h, they are only average at home fixtures and hasn’t won on back to back league games. Therefore, we predict Sutton to win on this upcoming fixture.