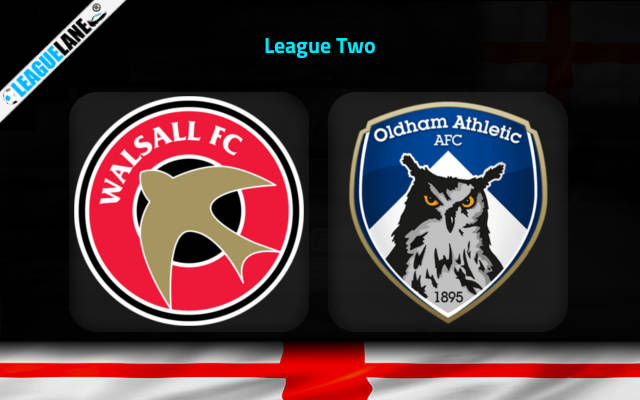 In game week 37 of League Two, Walsall faces Oldham Athletic for their next match on Tuesday at Walsall.

Walsall played their last match against Sutton United. Walsall made use of the penalty goal to their advantage and scored the only goal in the match, earning themselves a win in the match. The match ended with 1-0 FT score.

Oldham Athletic played their last match against Sutton United. Sutton secured a narrow win in the match with a last-minute goal. Oldham failed to score in the match, ending the game with 1-0 FT score.

Walsall’s performance has been inconsistent throughout the season, producing mixed results for the team. However, the team has shown some improvement in their matches and currently has an unbeaten streak going on. Their inconsistency has affected their standing, placing the team 16th on the league table with 43 points.

Oldham Athletic has played poorly in their matches and has won in only a few matches this season. The team currently is on a cold streak, which in the last four matches. The teams stand as the first team on the relegation zone with only 31 points to their name.

Oldham Athletic has played poorly in their matches throughout the season. Oldham has only had a few wins this season. Walsall has not played their best football this season. However, they have shown improvement in their form, making them the better performer of the two in the recent matches.

Even Walsall’s home matches have shown an improvement lately. They are currently on a win streak in their last three matches and will look to keep this streak going. Oldham Athletic has had little luck in their away matches. They have won in only three matches so far in their league matches.

So, I believe the match will end in a win for Walsall. Looking at the records, both teams have scored in their recent matches. So, we can expect the match to end with over 2.5 goals.