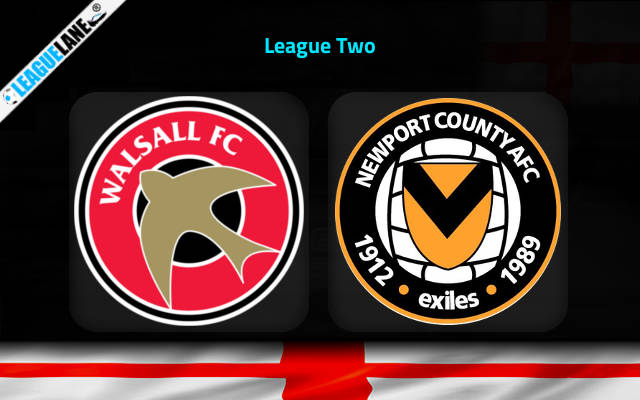 Newport is in the zone for League Two Play Offs while Walsall is at the middle of the table with 6 points in the difference. The hosts have won the previous league game and come into this fixture hoping to do the same. The visitors lost momentum in the last game ending in a defeat to which they hope to change in the upcoming away schedule as they visit Bescot Stadium this Saturday.

The Exiles are in the zone for Play Offs at the 6th position on the table with 34 points. Of the 22 matches played, they won on 9 games while drawing on 7 and losing on 6 other occasions. Their total goals to conceding ratio stands at 35:29 which shows that they need some room for improvement in the defensive structure.

Newport County have been scored against in 6 of their last 6 matches, seeing opposing sides hit 10 goals in total. They will be looking to keep up the momentum as they have lost just 1 game from the last 5 but the latest league fixture ended in a 3-0 loss against Rochdale.

The Saddlers is at the 12th spot on the table with 28 points in hand. They won, drew and lost 7 games each in the league. They have scored 25 in total while conceding a sum of 24 from the 21 games played so far.

Walsall have displayed some solid wall, seeing the total number of goals that have flown into the back of their net during their past 6 clashes accounts only 4.Their latest league fixture to Colchester ended in a 3-0 win.

Previous matches between the two has averaged 1.5 goals while BTTS has happened 50% of the time. Walsall has put together a good run of form keeping 3 clean sheets in the last 5 games.

Since the hosts are average at home and the visitors are median at away schedules, we can expect a possible draw happening at Bescot Stadium this weekend.